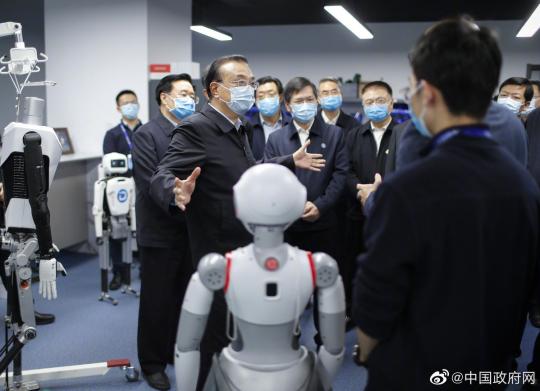 Premier calls for Henan to harness its competitive edge in talents

Premier Li Keqiang underscored the importance of fundamental science in fostering groundbreaking innovations and pushing forward a new type of industrialization during an inspection trip to Henan province on Tuesday and Wednesday.

It is more than necessary for China, with its huge market, to press ahead with integrated innovation and innovation for application purposes, the premier said as he visited Zhengdong New District in Zhengzhou, the provincial capital.

At Origin Dynamics Intelligent Robot Co Ltd, Li learned about the company's research and development of sensors and decelerators.

Algorithms play a key role in powering the research and development of robotics, while mathematics is essential to the development of algorithms, he said.

He urged the country's researchers to stay patient, refrain from taking shortcuts and strengthen the discipline of mathematics with strong commitment.

Henan, as one of China's most populous provincial areas, must harness its competitive edge in its talent pool, make itself a top attraction for talents and play a more important role in facilitating the rise of central regions, he said.

Li made the visit a week after the conclusion of the Fifth Plenary Session of the 19th Central Committee of the Communist Party of China, which adopted a proposed blueprint for economic and social development in the next five years. The blueprint stressed the core status of innovation in the nation's overall modernization drive.

The premier visited Sanquan Food Co Ltd, one of China's largest producers of fast-frozen food, and encouraged it to ensure the safety, quality and fine taste of its products.

He pledged continuous steps to ensure the efficacy and consistency of policies that stabilize jobs, safeguard people's livelihoods and help market players, as part of the nation's broader efforts to attain the goal of positive economic growth this year and lay a solid foundation for growth in the near future.

In a wheat field in Anyang, Li checked the condition of the soil and spoke with farmers and agrotechnology workers.

As China is set to achieve another bumper grain harvest this year, more work must be done to refine grain varieties and improve the quality of produce while continuing to increase grain output, he said.

It is important to proactively push forward the modernization of the agricultural sector and encourage agricultural operations of various forms, he said, adding that the aspirations of farmers must be fully respected during this process.

The premier visited Zheng Wenyi, a 60-year-old Anyang resident who was relocated to an affordable housing program from a shantytown area two years ago.

Affordable housing programs are important ways to improve the living conditions of the country's low and middle-income group, and it is important to ensure their construction quality and their distribution in a fair and transparent manner, he said.