Hainan races ahead with FTP plans 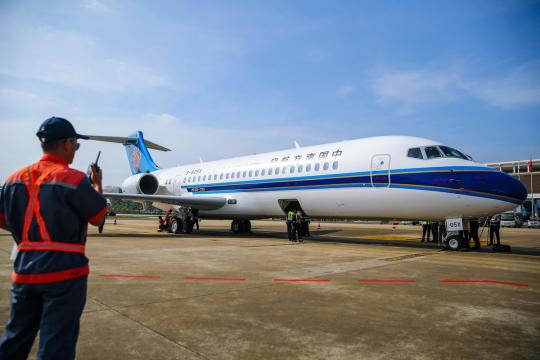 A domestically made aircraft of China Southern Airlines lands at an airport in Haikou, Hainan province. (Photo by Zhang Mao/for China Daily)

The government of Hainan, the southern island province of China, moved a step forward by unveiling a new guideline to widen market access and lower barriers to trade, investment and cross-border capital flows with the goal of building the island into a high-quality free trade port.

The goal is to build the island into a free trade port with an efficient and sound legal system, an internationally competitive tax system and first-class business environment and social governance that will attract more companies and investors and help boost the industrial competitiveness and development quality of the island, according to the guideline.

The Hainan Pilot Free Trade Port will implement a zero-tariff policy for goods trade and will further reduce barriers for services trade. Meanwhile, the free trade port will adopt a negative list for the management of imported products.

Another prominent feature of the new guideline is that the free trade port will explore further liberalization of the capital account step by step and will launch a pilot qualified foreign limited partner program, and a qualified domestic limited partner program. The pilot programs will allow both foreign and domestic investors to engage in cross-border investment more freely. The island will also build a new management system for cross-border financing to encourage more efficient two-way capital flows.

China announced the master plan for the construction of the Hainan Free Trade Port in June, marking the official start of the project.

Officials of the National Development and Reform Commission, the country's top economic regulator, said recently that the negative list for foreign investment in Hainan Pilot Free Trade Port is in the making, which will dramatically reduce the number of prohibited and restricted items. With this list foreign companies will have opportunities to invest in the island province, which is to be an important gateway for China's further opening-up.

Experts said that with more favorable policies being drafted and implemented in the province, Hainan is expected to be the next frontier of China's opening-up. Hainan will play a complementary role like the free trade zones in cities such as Shanghai and Shenzhen to boost the country's domestic consumption and foreign trade and investment, they said.

The island has already been seeing a steady influx of tourists and a surge in consumption, following a government policy in July that expanded the annual tax-free shopping quota from 30,000 yuan ($4,500) to 100,000 yuan per person. Hainan recorded duty-free sales of 1.04 billion yuan during the National Day holiday, up 148.7 percent on a yearly basis, according to data from the local Customs department.

Xu Hongcai, deputy director of the China Association of Policy Sciences' economic policy committee, said that Hainan is facing an unprecedented development opportunity and it needs to further improve its infrastructure and governance to attract more talents to do business and more international companies to build regional offices.

The province should also step up reform in the education sector and build more first-class institutes and universities as it will help cultivate a base for innovative technology and attract more talent to the island, which are critically needed for the development of a high-quality free trade port, Xu said.