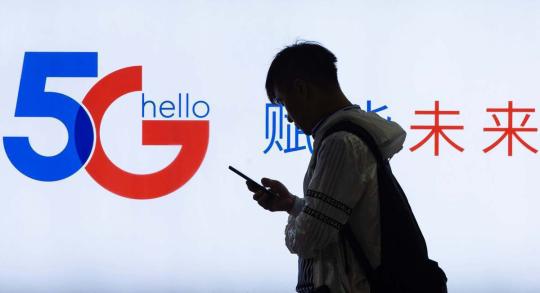 A pedestrian walks past a 5G promotion board. (Photo by Su Yang/For China Daily)

China urged Sweden on Wednesday to reverse its decision to ban Chinese companies from its upcoming 5G network construction, in order to prevent the move from having a negative impact on bilateral trade cooperation and the operation of Swedish companies in China.

"The Chinese side is strongly dissatisfied with Sweden's decision," Foreign Ministry spokesman Zhao Lijian told reporters at a news briefing in Beijing, urging Sweden to adopt an objective and fair attitude.

The Swedish Post and Telecom Authority, the country's telecom regulator, said on Tuesday that four wireless carriers bidding for frequencies in an upcoming spectrum auction for the new 5G networks must not use equipment from Huawei or ZTE and wireless carriers that plan to use existing telecommunications infrastructure for 5G networks must also rip out any existing gear from Huawei or ZTE.

The conditions were based on assessments by the Swedish military and security service, it said.

Zhao said Sweden is denigrating the reputation of Chinese companies and cracking down on Chinese telecom companies under the pretext of national security without any evidence.

"Politicizing normal economic cooperation goes against the free, open, fair, just and nondiscriminatory principles of the market economy as well as international economic and trade rules that are followed by Sweden," he said.

The spokesman noted that Chinese companies such as Huawei and ZTE have been strictly following local laws, actively promoting information and communications cooperation between China and Sweden, and making positive contributions to infrastructure development in the Scandinavian country.

And the Chinese market has remained open to European companies including those from Sweden, he added.

A statement released by the Chinese embassy in Sweden said that some people in the country claim that equipment supplied by Chinese companies, such as Huawei and ZTE, poses "threats to national security", but they are unable to present any concrete evidence.

"We firmly object to abusing the concept of 'national security', and to excluding specific companies from specific countries without any factual basis or evidence," the statement said.

The United States has waged an intense lobbying campaign in Europe to persuade its allies to shun Huawei and Sweden is the latest EU country to prohibit the company from playing a role in building 5G networks.