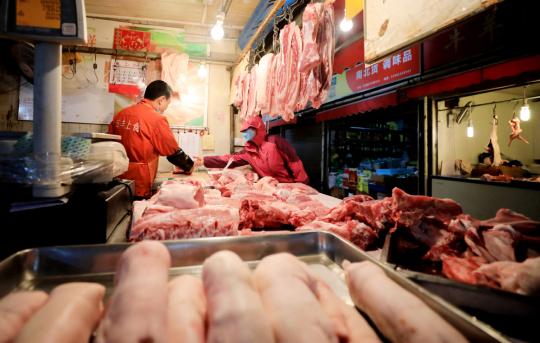 A local resident purchases pork at a farm produce market in Shanghai, on Feb 15, 2020. (Photo/Xinhua)

Pork supplies in China will increase by 30 percent year-on-year during the January-February peak consumption season, and prices will be stable, the Ministry of Agriculture and Rural Affairs said on Wednesday.

Thanks to booming market demand and policy incentives, hog production has been recovering steadily around the country this year, and pig farmers have been more motivated to expand their herds, Chen Guanghua, deputy chief of the ministry's animal husbandry and veterinary medicine bureau, told a news conference.

"The pork supply situation will fare better and better in the future," he said. "Experts estimate that pork prices during next year's New Year's Day in early January and Spring Festival in mid-February will be lower than last year's level, and no price spike will occur.

"It is guaranteed that people will not have to face a shortage of pork products during these festivals."

Data shows that by the end of last month, stocks of breeding sows had been increasing for 12 consecutive months and pig inventories had been rising for eight straight months.

"In June and July, stocks of breeding sows and hogs registered their first year-on-year increases, which signaled crucial turning points in the recovery of pig production," Chen said.

The pace of recovery has accelerated since August, with Chen saying the number of breeding sows was up 28 percent year-on-year last month, with hog numbers up nearly 21 percent.

The ministry said breeding sow and hog herds have recovered to over 80 percent of the level at the end of 2017－before African swine fever was first detected in the country in August 2018.

"If this trend continues, we are confident of realizing the goal of restoring the country's hog production capacity to the normal level by the end of this year," Chen said.

In the meantime, more hogs have been slaughtered for market, and total import volume from January to September reached about 3.29 million metric tons, up 132.2 percent year-on-year.

As a result, pork prices have dropped for seven consecutive weeks, Chen said.

"The overall epidemic situation is stable, pointing to achievements in our disease control work," Chen said.

"However, the virus has colonized and spread to large swaths of the country. Sporadic outbreaks are likely to occur in the long term, and disinfection and cleaning measures might be less effective due to low temperatures in fall and winter."

Further complicating the disease control situation is the frequent transport of breeding pigs and piglets, he said.

In terms of grain output, a bumper harvest is guaranteed, and total grain yields will reach a new high this year, Wei Baigang, chief of the ministry's development and planning department, said.

"It is expected that this year's grain output will remain above 650 million tons," he said.