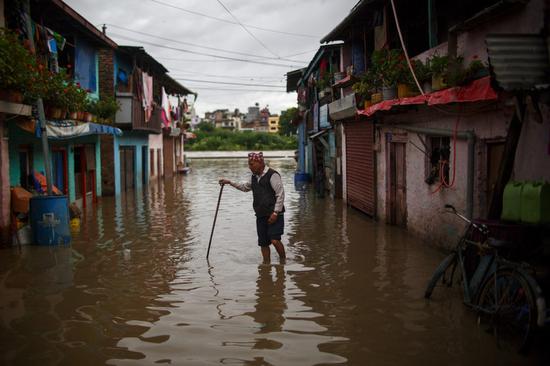 A man makes his way through flood water in Kathmandu, Nepal on July 20, 2020. (Photo by Sulav Shrestha/Xinhua)

A United Nations (UN) report, published on Monday ahead of the International Day for Disaster Risk Reduction on Oct. 13, registers a sharp increase in extreme weather events in the last 20 years.

It also says that 7,348 major disaster events were recorded during the period, which claimed 1.23 million lives, affected 4.2 billion people and resulted in approximately 2.97 trillion U.S. dollars in global economic losses.

According to the report, between 1980 and 1999, 4,212 disasters were linked to natural hazards worldwide, claiming approximately 1.19 million lives and affecting 3.25 billion people, and causing approximately 1.63 trillion U.S. dollars in economic losses.

The report also cites major increases in other categories, including droughts, wildfires and extreme temperature events.

There has also been a rise in geo-physical events, including earthquakes and tsunamis, which have killed more people than any of the other natural hazards under review in this report.