Shenzhen aims to be world hub of innovation 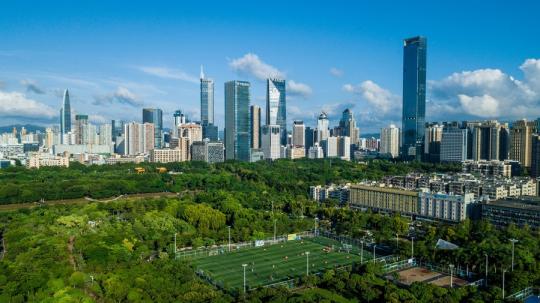 President to speak in city as plan set to provide boost to technology, creativity

Shenzhen, a high-tech hub adjacent to Hong Kong, is expected to further grow into a center of innovation, entrepreneurship and creativity with global influence and strong policy support from the central government, experts said.

They said they expect China's detailed plan to build Shenzhen into a pilot demonstration area of socialism with Chinese characteristics will boost high-quality development in the city, further drive the development of the Guangdong-Hong Kong-Macao Greater Bay Area and set a model for other Chinese cities in economic transformation.

The new plan came as this year marked the 40th anniversary of Shenzhen's designation as China's first special economic zone. President Xi Jinping will attend a celebration in Shenzhen on Wednesday and deliver a speech to mark the anniversary, Xinhua reported on Monday.

The ChiNext index, which tracks Shenzhen's innovative startup-heavy board, rose 3.91 percent to 2,777.39 points on Monday.

"Over the past 40 years, Shenzhen has been transformed from a small fishing village into an international city full of charm, vitality, innovation and creativity, " said Wang Changlin, president of the Academy of Macroeconomic Research of the National Development and Reform Commission. "However, there are still gaps in the levels of innovation, science and technology education and public service between Shenzhen and innovative cities with global influence.

"With a booming population and rapid economic development, Shenzhen also faces new constraints and problems in growth. To pursue high-quality development, it is necessary for Shenzhen, a modern metropolis with a population of more than 20 million, to rely on reforms to inject new impetus and overcome difficulties," Wang said.

"With the support of preferential policies outlined in the plan, Shenzhen will not only foster high-quality development, but also will play a key role in boosting the development of the Greater Bay Area and the nation."

Under the three-step plan issued by the general offices of the Communist Party of China Central Committee and the State Council, reforms will be launched this year in fields such as market-based allocation of production factors, business environment optimization and the utilization of urban space. The first list of pilot reforms will be formulated and implemented this year.

"Over decades, Shenzhen has become the window and experimental field for China's reform and opening-up. The new plan marks a key move to deepen reforms and expand opening-up at a higher level," said Wang Yiming, former deputy director of the Development Research Center of the State Council.

Preferential policies, including fostering a business-friendly environment, easing market access and opening more industries to foreign investors, will boost investment, introduce more high technology and attract talent to Shenzhen, Wang Yiming said. "It will help the country create a new economic development pattern of 'dual circulation' that uses the domestic market as the mainstay while domestic and foreign markets complement each other."

The new plan stresses accelerating the cultivation of the data market, which is in line with the technological revolution and will help further drive digital transformation, he said.

Liu Shijin, deputy director of the Economic Committee of the National Committee of the Chinese People's Political Consultative Conference, said the free flow of production factors in land, labor, capital, technology and data will help vitalize the market and boost innovation.