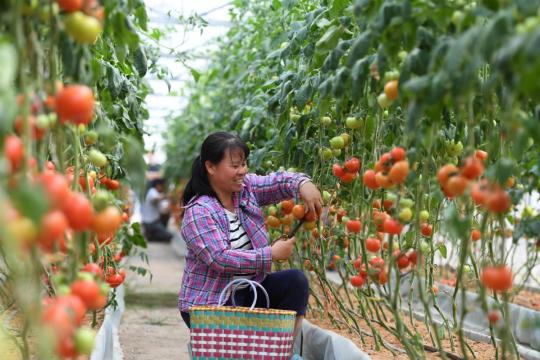 A farmer picks tomatoes in a greenhouse in Tangwan, a village in Huanjiang Maonan autonomous county, Guangxi Zhuang autonomous region, on May 12, 2020. (Photo/Xinhua)

However, the relief programs rolled out over the past eight years to aid rural poor will stay in place, a senior official said on Monday.

Officials plan to introduce a "transition period" to ensure that the yearslong assistance programs will continue to serve tens of millions of farmers who have recently escaped absolute poverty, said Liu Yongfu, director of the State Council Leading Group Office of Poverty Alleviation and Development, the top antipoverty agency.

They will also create a mechanism to monitor and prevent farmers from reentering destitution, Liu said.

Liu spoke at a seminar about President Xi Jinping's instructions on the nation's antipoverty efforts, held by his office and the Publicity Department of the Communist Party of China Central Committee in Beijing.

Attended by government officials and scholars, the conference was the first of the weeklong events marking the seventh National Poverty Relief Day on Oct 17. The date is also observed globally as the International Day for the Eradication of Poverty.

The transition period follows the nation's effort to slash rural poverty on a massive scale, which it has managed to do since late 2012 thanks to an assortment of poverty relief plans ranging from fostering rural industries and expanding affordable healthcare to relocating farmers out of isolated ancestral homes.

On multiple occasions, Liu has called the plans "extraordinary measures" that aim to end domestic poverty before 2021, the Party's centenary.

But as the antipoverty campaign nears an end, fears have arisen over a return to massive impoverishment when aid is suddenly halted.

The fears were compounded by the economic impact of the COVID-19 pandemic as well as floods and other geological disasters wreaking havoc in southern provinces this summer.

To address the concerns, Liu said continuous efforts will be made to strengthen what has been achieved so far and to further close the wealth gap.

The transition period was also engineered to facilitate the nation's switch from fighting absolute poverty to the grander goal of revitalizing the nation's less affluent rural regions.

"Escaping extreme poverty is not an end but a starting point for new lives and more endeavors," Liu said.