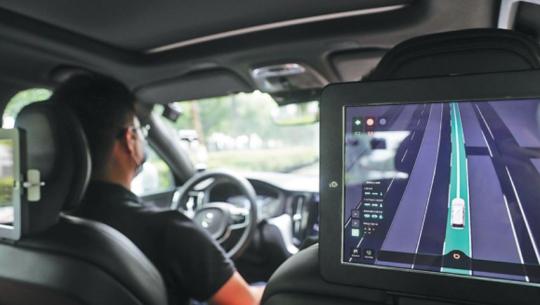 A driver participates in an autonomous driving road test in Shanghai in June. (Photo/Xinhua)

Chinese startups in the field of self-driving or fully automated vehicles are beefing up their presence in foreign markets.

Their move comes in the wake of China's imminent lead in both related technologies and their commercialization in the global market.

According to a Noon announcement, Neolix will build driverless vehicles customized for the region so they could withstand extreme temperatures of above 50 C in the summer.

Neolix had already begun mass-production of its fully automated delivery vans in May. Technology giant Huawei Technologies Co and e-commerce behemoth JD are its customers.

"Orders have surged after the epidemic, mainly because of shortage of human resources and virus infections. The current scenario is conducive to use of unmanned vehicles," said Yu Enyuan, CEO of Neolix.

Yu said Neolix has a "simple "development strategy for 2020－make both ends meet, and somehow continue to strive against all odds, to become the first self-sufficient company in the unmanned vehicle sector.

Growth of the autonomous vehicle industry is accelerating as COVID-19 has increased market demand for driverless technology. During the epidemic, several hospitals and companies used autonomous vehicles to deliver necessities like masks and meals to patients and medical workers, thereby minimizing the spread of the contagion.

"Investors have realized that autonomous vehicles will be rolled out on a large scale over the next three to five years. They have also realized that this field is no longer a high-risk investment area and that more capital is needed to expand business and boost technological stability," said Han Xu, founder and CEO of WeRide, a Chinese smart mobility company.

In overseas markets, commercialization of China's autonomous vehicles is speeding up in the passenger car segment and gaining momentum in the truck segment.

TuSimple, a startup that makes autonomous trucks and has offices in both China and the United States, said it has teamed up with leading logistics operators in the US to build what it claimed would be the world's first autonomous freight vehicle network.

By cooperating with leading firms including US truck operator US Xpress Enterprises Inc and delivery giant United Parcel Service Inc, TuSimple aims to run more than 100 deliveries a week, doubling its current number of freight hauls.

Cheng Lu, TuSimple's president, said the company aims to try out fully autonomous cargo vehicles next year on highways and at specially developed terminals, with trials to be expanded from Los Angeles to Jacksonville, Florida, between 2022 and 2023.

TuSimple, founded in 2015, currently operates automated trucks out of Tucson, Arizona. It is one of a number of startups developing technology aimed at making long-haul trucking cheaper and more efficient.