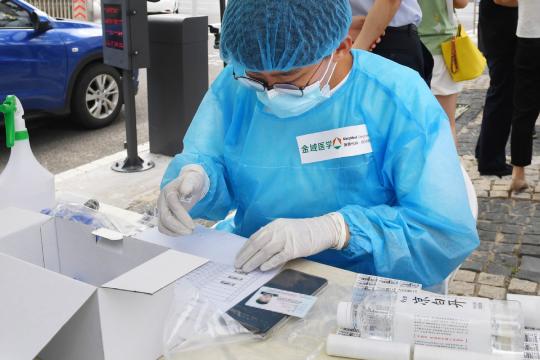 A medical worker verifies application forms at a nucleic acid testing site outside the Guoxin Gymnasium in Qingdao, Shandong province, on July 30, 2020. (Photo/Xinhua)

Three asymptomatic cases of COVID-19 have been reported in Qingdao, Shandong province, triggering an emergency response that included nucleic acid testing of all their contacts and disinfection of their living and work places, the city's health authority said on Sunday.

Based on China's criteria for regional coronavirus infection risks, the three cases have not increased Qingdao's risk level, meaning tourists arriving in and leaving the coastal city haven't had to have their health codes changed, experts from the city's health commission said.

After an epidemiological investigation, local experts said the cases were related to wards at the city's pulmonary hospital, where COVID-19 patients who have arrived from overseas are treated in isolation. The hospital has now suspended medical services for people without COVID-19.

Nucleic acid test results on the three asymptomatic patients were positive on Saturday, as were the results of follow-up tests on Sunday. They are under medical observation, the commission said.

One of the three patients, surnamed Han, 58, was admitted to the chest hospital with tuberculosis on Sept 9 and was discharged seven days ago. He went to a hospital near his residence to undergo nucleic acid testing because he planned to return to the chest hospital for a follow-up TB examination on Monday.

The other two patients are a married couple. The wife, a hospital attendant surnamed Jiang, 53, attended to a non-COVID-19 patient at the hospital from July 21 to Sept 29. Her husband, surnamed Shao, 57, is a taxi driver.

Shao told the health authority he wore a mask at work and never talked to passengers. He went to hospital for treatment for a mild stroke on Saturday morning and was required to undergo nucleic acid testing first.

The city has launched an emergency response and traced all people who could have been in close contact with the three patients or their close contacts, and they are undergoing nucleic acid tests.

Hospitals, residential buildings and other places the patients lived and worked have been disinfected.

The center for disease control and prevention in Dalian, Liaoning province, warned city residents not to go to Qingdao unless absolutely necessary. It said residents who have been to Qingdao's Shibei district, where the three patients reside, those who have been in contact with them, patients at Qingdao's chest hospital and overseas returnees who have traveled from Qingdao since Sept 27 should report to their local communities and take necessary preventive measures.

It is the second time Qingdao has reported asymptomatic cases in less than a month. Two stevedores at Qingdao port who had unloaded imported frozen seafood tested positive on Sept 24. A total of 234 people who had been in close contact with them have finished their medical isolation, with negative nucleic acid test results, the city's health authority said on Friday.