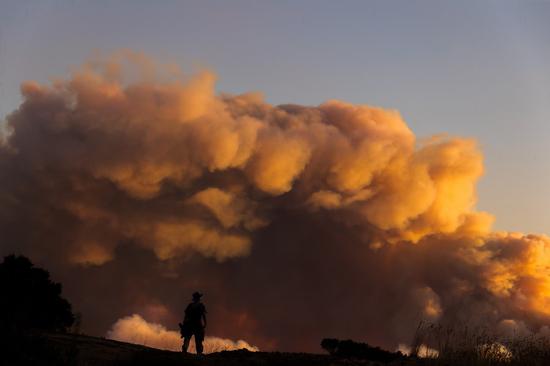 "Hazy conditions across Colorado are due to the ongoing blaze (Middle Fork Fire), along with the wildfires burning along the nation's West Coast," the InciWeb, a national incident information system run by the U.S. government, reported Thursday.

"It was a surreal dawn this morning," Linda Scherner told Xinhua on the same day. "The sun was choked off by a sky filled with haze -- it was like a red circle trying to be seen."

Scherner is a longtime resident of Leadville, Colorado, a small town located at an elevation of over 3,000 meters.

The historic fires along America's West Coast are not only blanketing Colorado, but also being seen thousands of kilometers away in Europe, as far away as the Netherlands and Germany.

"The fact that these fires are emitting so much pollution into the atmosphere that we can still see thick smoke over 8,000 km away reflects just how devastating they have been in their magnitude and duration," scientist Mark Parrington said in a statement Wednesday.

Moreover, according to CAMS' forecasts, smoke from the fires scorching California and the Pacific Northwest "is starting to cross the Atlantic again and will reach northern Europe later this week, as it did at the end of last week."

"From north to south, America's West Coast is on fire. The present fires all over the west are the worst with highest temperatures and the worst air quality in history," Californian businessman from the environment industry Glenn Nemhauser told Xinhua Thursday, referring to America's almost 3,000-km-long Pacific coast.

In just the past month, drought and high temperature conditions ignited some 3 million acres (about 12,000 square kilometers) in California and another 1.6 million acres (6,500 square kilometers) in Oregon and Washington states, leveling several small towns, destroying thousands of homes, and claiming at least 34 lives, according to media reports.

Oregon has seen a million acres (about 4,000 square kilometers) of land torched since 2020 began, "nearly double the 10-year average of approximately 557,811 acres (2,257 square kilometers)," Oregon Department of Forestry said Thursday, noting that some 6,500 firefighters were battling the blazes.

In California, authorities said 17,000 firefighters were battling 25 major fires on Wednesday, with 25 killed, while hundreds of thousands of people had been evacuated, and almost 8,000 homes and structures incinerated by fires in all three states.

Nearly 4,000 evacuees remained displaced, according to the American Red Cross.

In Colorado, about 1,600 km to the east from California, on the inferno region's eastern edge, Pine Gulch Fire, the biggest wildfire in state history, was 95 percent contained Thursday with 139,007 acres (563 square kilometers) burned.

Last week's rain in the Rocky Mountains states gave firefighters a breather, but the sprinkling did little to slow Cameron Peak Fire, which was only 8 percent contained Thursday with 102,596 acres (415 square kilometers) consumed, another possible record-breaking blaze.

Just 10 days ago, another big blaze, Middle Fork Fire, erupted in western Colorado near ski resorts at Steamboat Springs, which was at 5,445 acres (22 square kilometers) with zero containment, according to the InciWeb.

"I have lived in California for 33 years and I have personally witnessed the continuous decline in rainfall and the increase in forest fires," said Nemhauser, also a part-time college teacher.

"This is clearly global climate change caused by man-made air pollution from coal and oil combustion," he added.

However, U.S. President Donald Trump on Tuesday visited California and some of the devastation, and "refused to acknowledge the effects the climate crisis is having on the state's forest fires," CNN reported.

California just recorded the hottest August in state history, according to the National Weather Service.

"It's unlikely the president will ever see the light," he added. Enditem