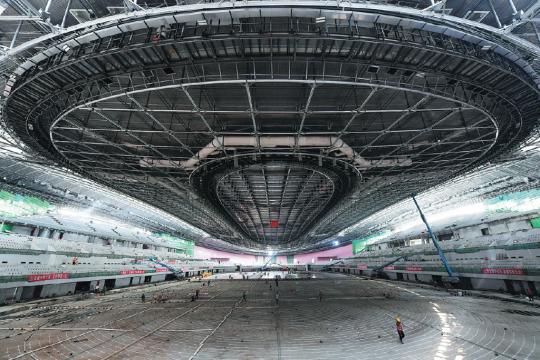 Construction work continues at the National Speed Skating Oval in Beijing, which is due to be completed by October. (Photo by Wei Xiaohao / China Daily)

Beijing is well on track to fulfilling its promise to host a green and sustainable Winter Olympics in 2022, with the work done to date involving eco-friendly solutions and carefully drawn up plans for use of facilities after the Games.

With the COVID-19 outbreak in China now under control, preparations for the sporting spectacular are in full swing again in all three hosting areas－downtown Beijing, the city's northwestern district of Yanqing and the co-host city, Zhangjiakou, Hebei province.

All venues for the Games, comprising newly built or renovated facilities, will be ready by the end of this year in time for the 2020-21 winter season, when a series of official trial events will be staged in the hosting areas, according to the Beijing Organizing Committee for the 2022 Olympic and Paralympic Winter Games.

This impressive progress is perhaps best illustrated at Xiaohaituo Mountain in Yanqing, where two new venues－the National Alpine Skiing Center and the National Sliding Center－have taken shape over the past three years. Ecological protection and energy efficiency have been the top priorities.

All the courses being used for competition at the skiing center, China's first alpine resort with a drop of more than 800 meters, were completed by the end of last year.

In 2022, the venue will host 11 Olympic disciplines, including downhill and giant slalom.

The venue's design features an efficient water recycling system, which will collect rainwater and store melted snow at two high-altitude reservoirs. The water will then be pumped up to snow-making machines along the slopes, where man-made snow is needed for course preparation during dry winters, according to the property's owner and constructor, Beijing Enterprises Group, or BG.

The sliding center for bobsled, luge and skeleton events features a wooden roof covering its entire length of 1.9 kilometers, providing an effective sunshade to reduce energy consumption and keep the track frozen.

Li Changzhou, a deputy general construction manager for BG, said last week at the construction site, "Technically, it was almost mission impossible to build these projects, which we've never had before, in just three years.

"Our goal is to meet the requirements for hosting such sports to the highest standard while ensuring that the construction and operations are as energy-efficient as possible."

After the Games, both venues will host international races and act as training bases for national teams.

Despite the massive earthworks and engineering work involved, the need to protect vegetation was taken into account at Xiaohaituo Mountain.

Liang Dedong, a BG executive overseeing environmental protection and sustainable development, said that based on a pre-construction evaluation, more than 24,000 trees were transplanted from the mountain ridges, where ski slopes and sled courses are being built, to a nearby 53-hectare forest park.

"Protecting the fragile ecological environment and ensuring minimal impact on the forest and wildlife is the top priority for our construction work. We are proud to see that over 90 percent of the transplanted trees have survived and flourished in their new home at the park," he said.