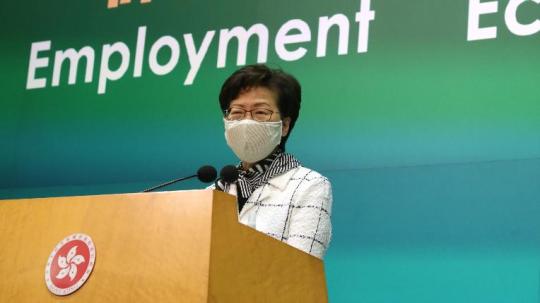 Hong Kong Chief Executive Carrie Lam Cheng Yuet-ngor on Saturday dismissed rumors of a curfew order to halt the spread of the coronavirus as a "vicious attack" on the central government, adding that such speculation hampered the city's efforts to fight the virus.

Lam denounced false online rumors and some media reports that the government would shortly implement a "lockdown" after an upsurge in locally transmitted COVID-19 cases since July 5.

"Such malicious rumors have made our anti-epidemic efforts even more difficult," she said in a social media post.

The death toll in the city has reached 17 after an 84-year-old man infected with the virus died at Pamela Youde Nethersole Eastern Hospital on Saturday. As of Saturday afternoon, the total number of confirmed cases in Hong Kong had risen to 2,505. More than 40 percent of the cases were recorded in the past two weeks.

Lam said the special administrative region (SAR) is aware of the situation, but extreme measures such as a "stay-at-home order" or a "lockdown" would only be the last resort.

"There is still room for further restricting the operation of various premises and reducing the number of people going out," she noted.

Lam also slammed negative comments about the central government's support and assistance for the Hong Kong SAR, saying the remarks were aimed at "damaging the relationship between the central authorities and the HKSAR."

Lam noted that the central government has worked hard to care for and support the people of Hong Kong during the epidemic. The latest step was an announcement to help enhance the testing capability and retrofit the AsiaWorldExpo into a "mobile cabin hospital" at her request, she said.