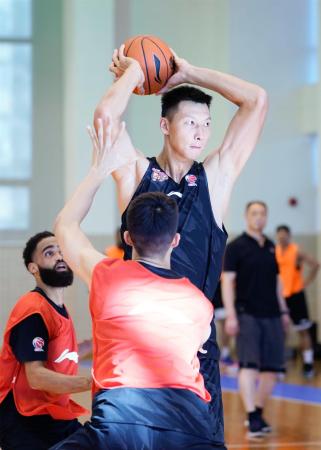 Despite the absence of some foreign talent, the CBA's big guns are confident the long-awaited resumption of the domestic league this weekend won't lack for drama or high-octane action.

Teams－many of whom are without their foreign players due to pandemic-related travel restrictions－have entered their final tune-up ahead of Saturday's tip-off, with logistical arrangements for long stays in host cities under strict virus prevention measures augmenting the usual fitness, tactical and video analysis prep.

After a five-month hiatus due to the pandemic, the regular season will resume in two cities－Qingdao in Shandong province and Dongguan in Guangdong province.

Each venue will host a 10-team group, with games played behind closed doors and access only allowed to teams, essential operation personnel and a limited number of media staff.

After a 15-day Phase One, the groups will move to a different, as-yet undecided, host city for Phase Two to complete the regular season with cross-group games by late July.

The top 12 teams will qualify for a truncated postseason, with the first two playoff rounds contested as oneoff games before the best-of-three semifinals and finals.

Despite having trained for months, the transition to competitive action will be a tough physical and mental challenge for players, reckons Du Feng, head coach of the defending champion Guangdong Southern Tigers.

"Inevitably, players will feel tired mentally as they've experienced a really long beak during which they didn't know when it would be over," said Du.

"Physical conditioning is crucial for every team given the tight schedule after the restart. However, it's also important to make sure that players are mentally ready to go out there and fight on court against some real opponents again."

With most of the league's ex-NBA import players stuck overseas due to travel restrictions amid the pandemic, gaps between perennial powerhouses and underdogs have significantly narrowed, making the remainder of the season intriguingly unpredictable.

According to media reports, only three teams－the Beijing Ducks, their crosstown rivals the Royal Fighters and the Nanjing Monkey Kings－have their full quota of two imports at their disposal, with the others left to select all-Chinese rosters or play with just one foreigner.

The nine-time champion Southern Tigers have to rely more on their domestic roster, led by national team backbone Yi Jianlian, for their title defense after managing to recall only one foreigner in American forward Sonny Weems.

With the ever-reliable Yi and several other national team members among its ranks, Guangdong still seems the team to beat. However, challengers such as the fully-staffed Ducks and Royal Fighters, as well as 2017-18 champions the Liaoning Flying Leopards, remain forces to be reckoned with.

With its aggressive guard-center tandem of Guo Ailun and Han Dejun leading the charge, Liaoning enters the restart in bullish mood.

"I am really satisfied with the quality of training and everybody's dedication on the restart," said Liaoning head coach Guo Shiqiang, who is without his team's imports.

"We will make necessary adjustments to our tactics playing without the foreign players but we will be as competitive as we always are."

In an attempt to make the competition fairer, the league has adjusted its import policy to limit teams to having one foreigner on the court against opponents who are fielding all-Chinese lineups. Otherwise, the original rule of two foreigners on court per game will be observed.

However, the absence of some foreign coaches, such as the Ducks' Greek mentor Yannis Christopoulos, has left teams with no option but to count on local staff on the bench.

Despite his lack of experience at barking instructions from the sideline, Xie Libin, Christopoulos' assistant, said he's ready to embrace the challenge of leading the Ducks in their bid for a fourth league title.

"It might get difficult for me at times to lead the team acting as the head coach due to my limited experience in this role," Xie told Beijing Youth Daily before the team left for Qingdao on Monday.

"But the team's solid preparation over the past three months, especially the great form of our core players, has given me confidence to lead them to good performances even without our head coach on the sideline," said the 34-year-old former Ducks guard, who retired in 2016.

Due to the recent resurgence in positive COVID-19 cases in Beijing, both the Ducks and the Royal Fighters chose to leave the capital early for their respective host cities in a bid to minimize infection risks.

The Ducks won three CBA titles from 2012-15 with the help of former NBA star Stephon Marbury, who now coaches the Royal Fighters, and they are now many observers' favorites to grab a fourth this year with Chinese-American guard Jeremy Lin and ex-NBA center Ekpe Udoh to the fore.

Xie, though, has attempted to play down rising expectations on his team. "I didn't set a specific target for myself," he said. "I just hope the team can work well in each game. We boast a complete roster, and have a chance of improving our standing."