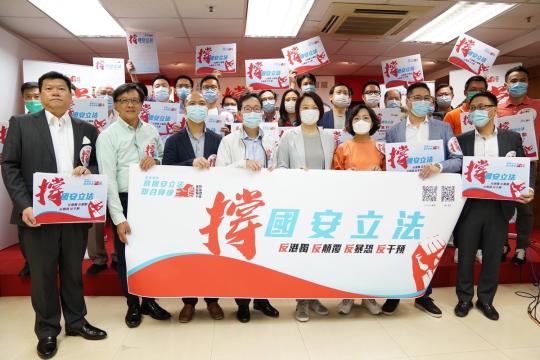 Local residents attend the launch ceremony of a petition in support of the national security legislation in Hong Kong, on May 24, 2020. [Photo/Xinhua]

Chairman of Sun Hung Kai Properties Raymond Kwok Ping-luen and Chairman of New World Development Henry Cheng Kar-shun, both major real estate developers in the city, said they believed that this legislation would effectively establish a stable and orderly social environment for investment and business for the benefit of all people and consolidate the city's lead as an international financial hub and its long-term stability and prosperity.

"I think the central government has made it clear that the legitimate interests of investors, enterprises and residents will continue to be protected by the law. Therefore, investors and businesses can put their hearts at ease and residents can continue with their peaceful and contented life," said Kwok.

Fu Yuning, chairman of China Resources Group in Hong Kong, said the decision to introduce a national security law and establish an enforcement mechanism can effectively help Hong Kong to boost global investors' confidence in its markets by putting a stop to violence by extremists and separatists.

That is of great importance in maintaining the status of Hong Kong as an international financial center, Fu said.

The Hong Kong Association of Banks, consisting of all licensed banks in the city, said investor confidence in Hong Kong is expected to be strengthened when details of the proposed legislation are made known.

In a statement on Tuesday night, the association said a stable business environment is a key prerequisite for the sustainable development of Hong Kong as an international financial center.

Meanwhile, more than 1.1 million Hong Kong residents, including top government officials, have signed a petition in support of the national security legislation in a campaign that started on Saturday.