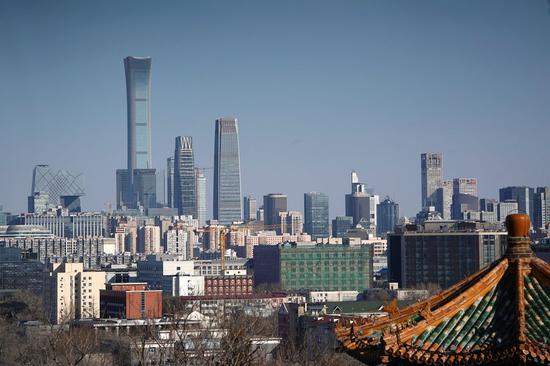 Photo taken on March 4, 2020 shows the skyscrapers of the Central Business District (CBD) in Beijing, capital of China. (Xinhua/Ju Huanzong)

The China Securities Regulatory Commission (CSRC) made the remarks when asked to comment on the Holding Foreign Companies Accountable Act passed in the U.S. Senate last week, which demands extra information disclosure from foreign public companies in the U.S. market.

Judged from the bill and remarks of relevant persons in the U.S. Congress, some clauses of the bill are aimed directly at China, rather than based on professional considerations in securities regulation, the CSRC said in a statement on its website.

Citing a clause that forbids foreign issuers to trade securities in the U.S. market if they have failed to meet auditing standards of the U.S. Public Company Accounting Oversight Board (PCAOB) for three consecutive years, the CSRC said the act has ignored the long-term efforts of both countries to enhance cooperation in audit regulation.

China has always attached great importance to China-U.S. cooperation in audit regulation in the capital market, it said.

"We look forward to a positive response from the U.S. regulator," said the CSRC, calling on both sides to push forward joint inspections of relevant accounting firms through friendly consultation on an equal footing and in line with international common practices of cross-border cooperation on audit regulation.

The bill will harm the interests of both sides by hampering foreign enterprises from listing in the U.S. market and undermining investor confidence in the U.S. capital market and its international status, said the CSRC.

China hopes the U.S. side would adhere to professionalism and meet China halfway to solve regulatory cooperation issues according to market-oriented and law-based principles, and strengthen China-U.S. audit regulation cooperation with concrete actions, so that the two sides would reach consensus at an early date and jointly protect the legitimate rights and interests of investors, it said. Enditem