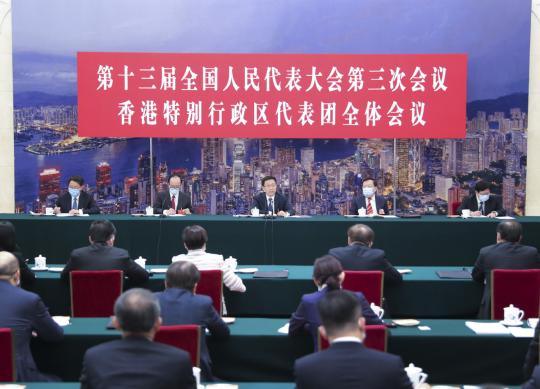 Vice-Premier Han Zheng participates in panel discussions with deputies from the Hong Kong and Macao special administrative regions attending the third session of the 13th National People's Congress, on May 24, 2020. (Photo/Xinhua)

Han, also a member of the Standing Committee of the Political Bureau of the Communist Party of China Central Committee, made the remark while participating in panel discussions with deputies from the Hong Kong and Macao special administrative regions attending the third session of the 13th National People's Congress, the nation's top legislature.

Han reiterated that the draft decision, to establish and improve a legal framework and enforcement mechanism for safeguarding national security in Hong Kong from a State level, targets the small minority of "Hong Kong independence" and radical separatist forces.

Effectively preventing and punishing criminal activities that jeopardize national security according to law will help protect the life and property of the majority of Hong Kong residents, he said.

Also on Sunday, State Councilor and Foreign Minister Wang Yi assured foreign investors that the national security legislation in Hong Kong will not influence their legitimate rights and interests as well as the status of the special administrative region as an international financial center.

Speaking at a news conference on the sidelines of the annual meeting of the NPC, Wang said that the proposed legislation aims to punish the small minority of people who severely jeopardize national security.

It will not influence the high autonomy of the SAR nor the rights and freedom of Hong Kong residents as well as the legitimate rights and interests of foreign investors, he said.

The legislation will help Hong Kong to have improved legal systems, more stable social order and a better legal and business environment. It will also be more conducive to upholding the principle of "one country, two systems" as well as maintaining the SAR's status of international financial, trading and shipping center, Wang said, adding that foreign investors should be more confident of the future of the region.

Wang pointed to the violent protests organized by "Hong Kong independence" elements since June and the external forces behind the related activities, saying they have endangered national security. He warned external forces against meddling with Hong Kong affairs, and said no foreign country is allowed to interfere in China's internal affairs.

The draft decision on the national security legislation in Hong Kong has been submitted to the ongoing NPC session for deliberation.

Tam Yiu-chung, Hong Kong member of the NPC Standing Committee, said the central government has been very "prudent" in deciding to introduce national security law in Hong Kong as it has been mulled over for some time in view of the barrage of events that challenge the "one country, two systems" principle.

Han's remarks embody the central government's care for Hong Kong, as it will not tolerate the city being turned into a base for harming the country, Tam said.

Hong Kong's NPC deputy Maggie Chan Man-ki said Han's remarks are like an invigorating tonic for the public of Hong Kong that will help it restore social order and maintain peace and prosperity. The central government will lead the city out of its predicament caused by political turmoil and the COVID-19 epidemic, she said.