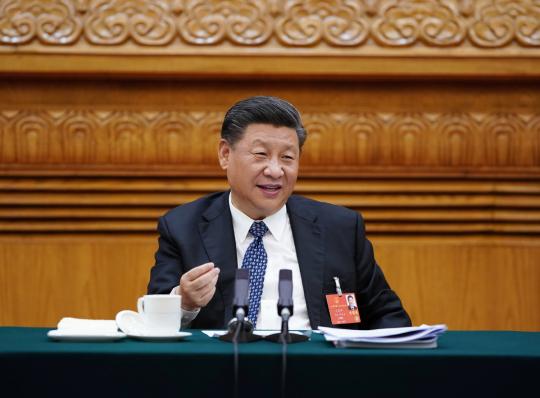 President Xi Jinping, also general secretary of the Communist Party of China Central Committee and chairman of the Central Military Commission joins a deliberation with deputies from Hubei province at the third session of the 13th National People's Congress, China's top legislature, in Beijing, on May 24, 2020. (Photo/Xinhua)

President Xi Jinping's remarks during a panel discussion of National People's Congress deputies from Hubei province have fully approved Hubei people's efforts in containing the novel coronavirus outbreak, and his words will boost their confidence to recover from COVID-19, NPC deputies from Hubei said on Sunday.

President Xi, also general secretary of the Communist Party of China Central Committee and chairman of the Central Military Commission, joined a deliberation with deputies from Hubei at the third session of the 13th NPC, China's top legislature, on Sunday afternoon.

"President Xi asked how many medics there are at the department of infectious diseases at my hospital and if they are enough...I didn't expect him to pay attention to such small details," said NPC deputy Luo Jie, president of Taihe Hospital in Shiyan city.

"It's obvious that President Xi has given a lot of thought on how to improve China's emergency response system in epidemic prevention and control."

Luo said the president also emphasized the importance of controlling the epidemic in accordance with the law.

Deputy Zhang Wenxi, Party secretary of the village of Chenyu in the provincial capital Wuhan, told Xi how the village people fought the epidemic and the gaps that were exposed during the process.

"As President Xi said, hospitals and communities are the two front lines in the fight against the COVID-19 outbreak. We must find ways to fix those gaps in epidemic control at the grassroots level," Zhang said.

"I was most impressed by how President Xi urged Hubei to fully implement the central government's policies especially designed to help Hubei's economy to recover swiftly. I think it will greatly boost Hubei people's confidence in getting through the tough time," said deputy Song Qingli, a farmer from Hefeng county.

The president also asked about the local average annual income as he talked about poverty alleviation efforts in the county, Song said.

"It shows that seeing people living a good life is important for President Xi," Song said.

Xi also knew about the contribution and sacrifices made by people in Hubei and Wuhan, which were hit hardest by the epidemic in the country, the deputies said.

"President Xi's joining the panel discussion of the Hubei delegation is already an encouragement for Hubei people. I believe the province can and will recover from the epidemic with the support from the central government," Luo said.