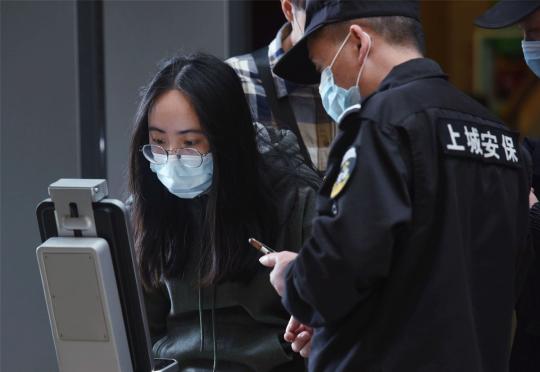 A smart device scans a visitor's face to collect information, including her health status code and body temperature, before allowing her to enter a museum in Hangzhou, Zhejiang province, in March. (LONG WEI/FOR CHINA DAILY)

He said leaks of personal information have become a "public hazard", making the protection of such information and the means of strengthening the obligations of information collectors, sharers and big data developers an important issue for the personality rights section of the civil code.

"Illegally hacking into someone's emails, stealing and trading other people's information, illegally disclosing other people's text messages or conversation records-all these behaviors have become common, polluting the internet and infringing people's personality rights," he said, adding that information technology may exacerbate the damage.

"Once the information has been revealed, it can be spread worldwide in an instant and the damage can be infinite."

China's legislative efforts to protect citizens' privacy date back to the 1980s.

According to Yang, national legislators considered including privacy protection in the draft of the General Principles of the Civil Law in 1986, while in 1988, the Supreme People's Court issued regulations that indirectly protected people's privacy by protecting the right to reputation.

With the rapid development of IT in recent years, China has started speeding up legislation on the protection of personal information, data and privacy.

Many experts have called for the introduction of a personal information protection law in line with the European Union's General Data Protection Regulation, which many observers consider the world's strongest data protection rules.

In 2017, the Cybersecurity Law came onto China's statute books, and last year the E-Commerce Law came into effect. Both contain articles that protect data in the digital era.

However, speaking at a media briefing in March last year, Zhang Yesui, spokesman for the Second Session of the 13th National People's Congress, said the country still needed a specific law to comprehensively curb illegal use of personal information and strengthen protection of people's privacy and legal interests.