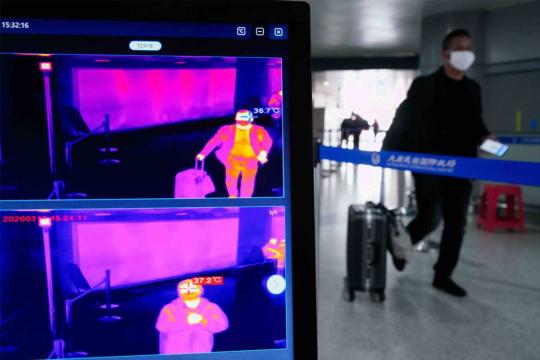 An artificial intelligence device at a security gate checks passengers' temperatures at an airport in Shanxi province in March. (HU YUANJIA/FOR CHINA DAILY)

It also specifies that they must explain the rules of information processing, the purpose, and the means and scope of the information, and they must not violate any laws, administrative regulations or mutual agreements.

The personality rights section of the code was submitted to the NPC Standing Committee for its first review in August 2018, and was also reviewed twice last year.

The draft marks the further reinforcement of China's efforts to protect personal information, following the enactment of the Cybersecurity Law in June 2017. In addition, it provides the first comprehensive set of data protection provisions in national legislation.

In recent years, data leaks from digital platforms have increasingly raised concerns about privacy, with many experts calling for a separate law to protect personal information.

In February last year, a video clip of the classic television series The Legend of the Condor Heroes-first broadcast in 1994-went viral on social media. It attracted attention because a netizen had swapped the face of Athena Chu, the original lead actress, with that of current star Yang Mi, although Yang was unaware of the move.

The netizen, who used the name "Huanlian Ge" on Bilibili, a popular video-sharing platform, used artificial intelligence technology to make the swap. Many viewers commented that the video looked so authentic that Yang actually appeared to be the star character.

However, the swap prompted doubts and controversy, as many people suggested the video could be an infringement of Yang's image rights.

The incident also brought deepfake, or "face-changing" technology, into the spotlight, prompting concerns about the consequences of such technology being misused or abused.

In August, a new mobile app became an internet sensation shortly after hitting the market. It allowed people to upload photos of their own faces and use artificial intelligence technology to swap them with the faces of celebrities in blockbuster movies or hit TV series.

The app-called ZAO, meaning "make" in Mandarin-was quickly subject to accusations of excessive collection of personal information and possible infringement of image rights. Some people were concerned that criminals could use their image to trick facial recognition payment software and defraud them.

"In the era of the internet and high technology, the most serious challenges encountered by the law are the protection of privacy and personal information," Wang Liming, a law professor at Renmin University, told Southern Metropolis Daily recently.