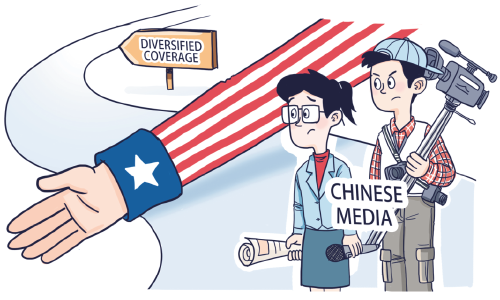 Beijing urged Washington on Monday to immediately reverse its move to further restrict visas for Chinese journalists in the United States, or it will face countermeasures.

Foreign Ministry spokesman Zhao Lijian said at a daily news briefing that China deplores the move and that it would escalate suppression of Chinese media in the U.S..

The regulation, which was issued by the U.S. Department of Homeland Security on Friday and took effect on Monday, limits visas for Chinese reporters working in the U.S. to a 90-day period, with an option for extension. The department said the rule change was to achieve greater reciprocity between the U.S. and China.

Zhao said that while most U.S. journalists based in China receive press cards and residence permits that are valid for a year, Chinese journalists in the U.S. are now limited to a 90-day working visa. He asked how this is in the interest of "reciprocity".

Such "reciprocity" is based on prejudice, discrimination and exclusion of Chinese media, he said.

It is a significant restriction compared with the open-ended, single-entry stays that the agency previously granted most journalists with Chinese passports and a valid entry visa.

"This wrong practice will severely disrupt normal reporting by Chinese media in the U.S. and will affect bilateral people-to-people exchanges," Zhao said.

The move came about three months after Washington designated five Chinese media entities in the U.S. as "foreign missions" and imposed a cap on the number of their employees, in effect expelling 60 Chinese journalists. China has since taken countermeasures against U.S. media outlets in the country in response.

In response to a question on a U.S. report accusing China of attempting to steal information about U.S. research on developing vaccines and treatment for the coronavirus, Zhao said China opposes all forms of cyberattacks, and the country is a champion of cybersecurity as well as a victim of hacking.

China is the front-runner in research on COVID-19 vaccines and treatment, he said, adding that it is immoral for anyone to make such claims against China without presenting any evidence.