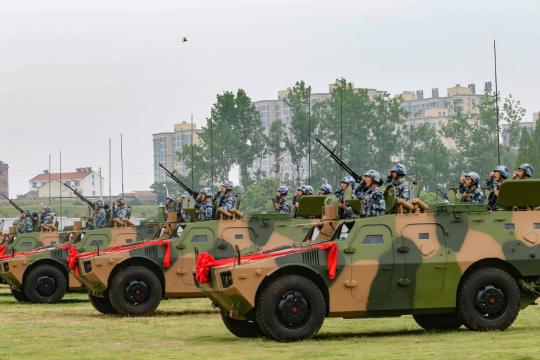 The airborne corps of the People's Liberation Army Air Force has fielded a new type of combat vehicle to its troops, according to the unit.

The airborne corps said in a statement on Saturday that the new airborne infantry fighting vehicles were recently delivered to a combined brigade stationed in northern Hubei province, marking the first time that Chinese paratroopers had ever received a wheeled armored combat vehicle.

It noted that the vehicle will facilitate the corps' endeavor to organize its fighting, command, communication and reconnaissance elements into an optimized integrated combat system so it can obtain superiority on the battlefield.

Major Yang Liang, an officer in charge of taking deliveries of the vehicle, said that each transport plane is capable of carrying three such vehicles and can drop them at short intervals.

He noted the machine is fast and can conduct amphibious and plateau operations.

"Its service has put an end to the absence of wheeled armored vehicles in the airborne corps, and also marked a new chapter in our mechanization and informatization efforts. Its deployment will extensively boost our all-landform combat capability," Yang said.

Video clips published by the corps show the vehicle is equipped with a 12.7-millimeter-caliber gun, several smoke grenade dischargers and night-vision devices.

The State-owned defense conglomerate said the vehicle can be carried and airdropped by major aircraft in the airborne corps and will become a useful tool in rapid deployment, emergency response and airborne penetration.

Sources familiar with the matter said the vehicle was designed at the Norinco First Academy in Beijing.

Before the new asset, the only armored combat hardware in the PLA Air Force's paratroop units was the ZBD-03 airborne infantry fighting vehicle, which runs on tracks instead of wheels.

The 8-metric ton ZBD-03 is believed to have been in service for more than 10 years. It is armed with a 30-mm-caliber gun and a single missile rail launcher used to fire anti-tank missiles.

Observers said the Air Force is waiting for Norinco to provide the new generation of airborne tracked combat vehicle to replace the ZBD-03.

The airborne corps will celebrate the 70th anniversary of its founding in September.