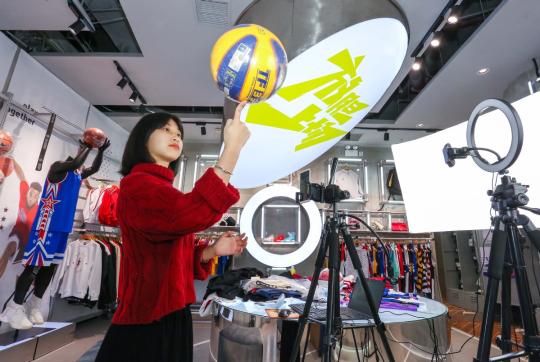 A saleswoman conducts livestreaming at a sportswear shop in Jinjiang, Fujian province, on April 2. (Photo by Dong Yanjun/For China Daily)

Li's remark came as he presided over a symposium to solicit opinions from leaders of non-Communist parties, the All-China Federation of Industry and Commerce and people without party affiliation on the draft of the Government Work Report.

The report is set to be delivered to the annual session of the National People's Congress, which had delayed its opening from March 5 to May 22 due to the COVID-19 pandemic.

The premier underscored the need for timely monitoring and analysis of the changing situation, as he recognized that China's development faced unprecedented difficulties and challenges due to the pandemic and the global recession.

These measures are the bottom line to ensure the stability of economic fundamentals and achieve the nation's targets for socioeconomic development this year, he added.

Small, medium-sized and macro businesses are the foundation of socioeconomic development and job creation, and helping them overcome difficulties is an important part of macro policies, said the premier.

He underlined the importance of reform and opening-up in further unleashing market vitality.

Li said inviting those outside the Communist Party of China to contribute suggestions to the Government Work Report is an important part of the system of CPC-led multiparty cooperation and political consultation, which would help the government improve its decision-making.

Gao Yunlong, chairman of the All-China Federation of Industry and Commerce, proposed that more work should be done to increase consumer spending and improve the business environment.

Xi Nanhua, a mathematician and an academician of the Chinese Academy of Sciences, suggested that more work should be done to improve the professional skills of workers and deepen reform to streamline administration and improve government services in the field of science and technology.

Li expressed his appreciation for their support for the work of the government, saying that their suggestions would be carefully studied and included during future revisions to the report and in the government's overall work.