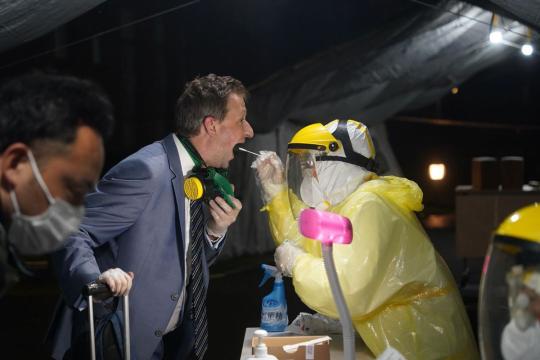 A foreigner receives a nucleic acid test at a temporary inspection point in Shanghai on March 21, 2020. (Photo by Gao Erqiang/chinadaily.com.cn)

The National Immigration Administration has called on foreigners in China to cooperate with quarantine measures as legally required while warning that those who refuse to do so will bear legal responsibilities.

The administration made the statement on its website over the weekend, saying foreigners in China should promptly register their accommodations and comply with the identification inspection by public security departments.

Foreigners in China should cooperate with local authorities, it said, and permit monitoring, quarantine and other coronavirus preventive measures as needed.

Foreigners over age 16 should show their passports to public security bureaus and accept inspection of their IDs. They should also register accommodations within 24 hours of arrival or change of address and accept being placed under medical observation if asked.

If they fail to declare their health condition or refuse body temperature checks, epidemiological investigation, collection of samples, isolation, on-site diagnosis and hospital referral, they will be held accountable under the law and face a warning, fine, detention or possible criminal liability.

If foreigners violate the law and regulations, public security departments may invalidate, cancel or confiscate their visas and related documents, or be repatriated－ordered to leave China－or deported－taken into custody and placed on an airplane.

Repatriated foreigners may not re-enter China for one to five years, and deported foreigners for at least 10 years, the administration said.

On March 31, a photo of an outbreak notification letter from a residential community in Beijing was circulated online.

According to the letter, a Tanzanian man did not comply with the regulation on quarantine at a designated facility after returning to China, but instead returned home on March 27. He refused to wear a face mask, ignored the warnings of community workers and the public security department and went out several times during the isolation period.

Beijing police said at a news conference on April 2 that they consequently ordered the man to leave the country by a certain date.

On March 29, a video circulated widely on Chinese social media showing a foreign man who refused to wear mask in a public area and cursed at and attacked an epidemic prevention worker in Xi'an, Shaanxi province.

Later that day, the local police said the man had disrupted public order and he was ordered to leave China.

"Since the outbreak of COVID-19, the Chinese government has attached great importance to the safety and health of all people in China, including foreigners," the administration said.

"Foreigners in China must abide by Chinese laws and may not endanger China's national security, harm public interest or disrupt social and public order," it said.