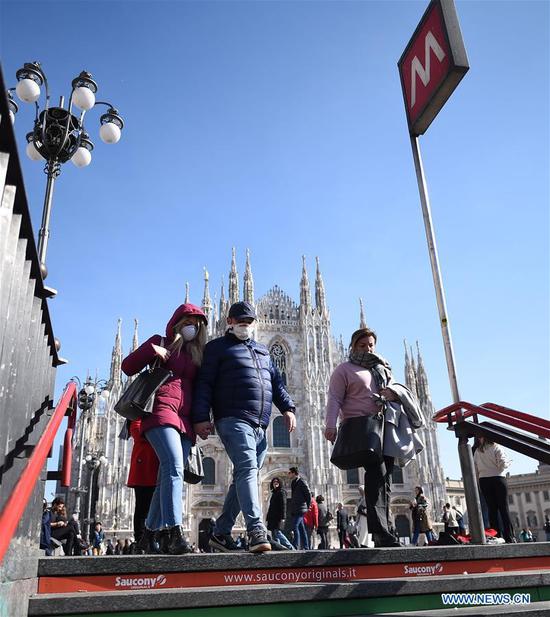 People wearing masks walk into a subway station in Milan, Italy, on Feb. 24, 2020. Six people have died and 222 have tested positive for the novel coronavirus (COVID-19) nationwide in Italy, Angelo Borrelli, chief of Civil Protection Department and Extraordinary Commissioner for the Coronavirus Emergency, told a press conference at 6 p.m. local time on Monday. (Photo by Daniele Mascolo/Xinhua)

With the novel coronavirus taking aim at a broadening swath of the globe, officials in Europe are now scrambling to limit the spread of an outbreak that poses new threats far beyond its epicenter.

Italy is trying to contain Europe's worst outbreak of the virus, with more than 280 people having tested positive for it and seven dying as of Tuesday. Most of the cases are in the northern regions of Lombardy, which includes the financial capital Milan, and Veneto.

The sudden outbreak of the disease over the weekend triggered alarm in Milan, bringing a noticeable drop in the number of people in public places and prompting shoppers to rush to supermarkets to stock up on basics.

Milan cathedral has been closed to visitors and the Venice carnival, one of the world's premier tourist attractions, shut early for the first time in decades. Police manned checkpoints around a dozen quarantined northern towns as worries grew across the continent, while upcoming football matches in Italy's Serie A league and the Europa League will be played behind closed doors.

UK authorities on Tuesday advised its citizens who had visited northern Italy to self-isolate if they had any flu-like symptoms. Austria said it temporarily halted rail traffic across its border with Italy. Slovenia and Croatia, popular getaways for Italians, were holding crisis meetings.

Although the outbreak has so far largely been confined to northern Italy, there were signs it could spread.

Authorities in the Sicilian city of Palermo said on Tuesday that a tourist from the northern town of Bergamo had tested positive and been placed in quarantine pending further tests.

"These rapid developments over the weekend have shown how quickly this situation can change," the Health Commissioner for the European Union, Stella Kyriakides, said in Brussels.

"We need to take this situation of course very seriously, but we must not give in to panic, and, even more importantly, to disinformation."

In an interview on Tuesday, Italian Deputy Economy Minister Laura Castelli said the country may need to call on the European Union to offer leeway on its budget targets as it struggles with the impact of the outbreak on an economy already on the brink of recession.

The comments came a day after Italian Prime Minister Giuseppe Conte warned that the fallout from the outbreak, so far concentrated in the economic powerhouses of northern Italy, would be "very strong".

On Monday, the European Union announced that it will spend 232 million euros ($251 million) on efforts to stop the spread of the respiratory disease.

As it announced the funding, the European Commission said it was working "around the clock" to support EU member states in their fight to stop the outbreak becoming a pandemic.

Ursula von der Leyen, president of the European Commission, said the money will boost global preparedness, prevention, and containment of the virus.

"As cases continue to rise, public health is the number one priority," she said.

"Whether it be boosting preparedness in Europe, in China, or elsewhere, the international community must work together. Europe is here to play a leading role."

Meanwhile, a team of experts from the World Health Organization and the European Center for Disease Prevention and Control arrived in Italy in a bid to support its authorities in countering the outbreak, the WHO announced on Monday night.

The WHO noted that countries across the European region must continue to prepare for and respond to cases of the virus.