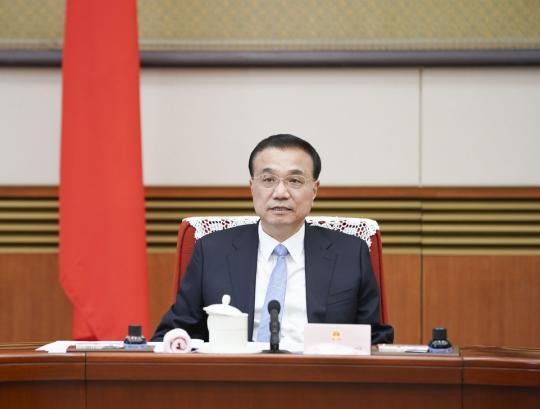 Premier Li Keqiang speaks at a plenary meeting of the State Council in Beijing, on Jan. 13, 2020. （Photo/Xinhua）

China will push for greater reform, opening-up and innovation to keep the Chinese economy running in a reasonable range for high-quality development this year, Premier Li Keqiang said at a plenary meeting of the State Council on Monday in Beijing.

He said the government is faced with heavy work tasks that also bear great significance, as China will realize its goal of building a moderately prosperous society in all respects in 2020.

Greater efforts should be made to improve the business environment, guide public expectations, boost the vitality of market entities, accelerate the transformation and upgrading of traditional industries and foster new growth drivers, he said.

Speaking of China's economic growth last year, the premier said the country has reached its major goals and completed its tasks for economic and social development, despite being faced with significant growing risks at home and abroad as well as downward pressure on the economy.

In 2019, the economy ran within a reasonable range, with steadily improving development quality, he said, noting that 13 million new urban jobs were created for the seventh consecutive year and people's livelihoods have been further improved.

These achievements have not come easily, Li said.

He noted that economic performance in the first quarter serves as an indicator for the market in the coming year. Governments at all levels and all departments of the State Council need to make a good start with concrete efforts, he added.

Local authorities should speed up the issuance of local government special-purpose bonds and make good use of them, pushing projects forward, he said.

He also called for greater credit support from financial institutions for the manufacturing industry, private companies and small and medium-size enterprises.

He said preparations should be made to guarantee stable supplies and prices of pork, as well as to ensure that the basic needs of disadvantaged people are met ahead of the upcoming Spring Festival holiday.

A draft of the Government Work Report, to be delivered at the third annual session of the 13th National People's Congress in March, was deliberated at the meeting.

A good draft should reflect responsible opinions from all walks of life, Li said.