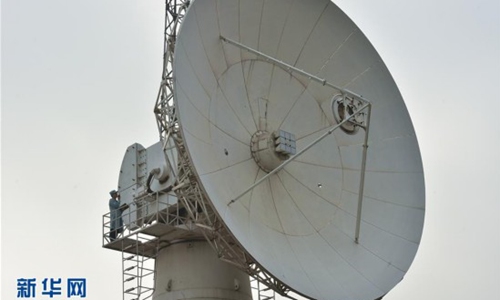 With stronger and clearer signals, the areas probed by the electromagnetic wave transmitter can cover all of China's territory and territorial waters, researchers said.

The new electromagnetic wave detector can penetrate thicker stratum and deeper in the seabed to predict earthquakes and explore strata structures, underground resources and resources at the bottom of the sea, noted the project manager, surnamed Guo from the 7th research institute of China State Shipbuilding Corp, adding  "The achievement of the project has significant strategic benefits."

As part of China's Major National Science and Technology Infrastructure Program as detailed in the country's 11th Five-Year Plan period (2006-10), the project was carried out without reference to foreign projects. "No similar device yet exists in the world," Guo said.

The transmitter and China's first seismometer that can receive extremely low frequency electromagnetic signals, sent by both artificial and natural sources, has been built around the Chinese capital area and seismic belt regions.

The collaboration between the transmitter and the seismometer will help make a number of breakthroughs in exploratory scientific experimental researches such as earthquake prediction and exploration of underground mineral, oil and gas resources and the continental shelf, Guo said.