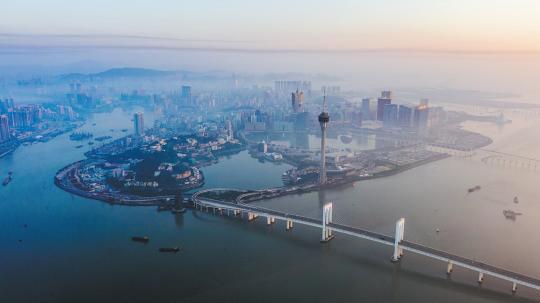 People from different sectors of the Macao Special Administrative Region are in good spirits after hearing President Xi Jinping's praise for the city, which encouraged them and filled them with the desire to bring the city to new heights of development.

Macao SAR lawmaker Chan Hong said she was "warmed" and "inspired" by the speech, in which the president acknowledged Macao's achievements and expressed support for its future development.

During the speech, Xi especially acknowledged the successful practice of the "one country, two systems" policy in Macao. Chan said it is a result of the concerted efforts of the central government, Macao officials and local people, adding that she is looking forward to Macao's greater development under the principle.

Wu Zhiliang, president of the Macao Foundation, said, "There is no doubt that Macao people got a heartwarming feeling from Xi's remarks at the airport."

He added Macao people have been longing for Xi's visit, and his remarks at Macao International Airport showcase that the central government has high expectations for the city.

Wu said he expects Xi's three-day visit to Macao to focus on economic diversification, facilitation of Macao's cooperation with Zhuhai's Hengqin area and career development for the city's youth.

Karen Tagulao, a Filipina expat who has lived in the city for 17 years, echoed Xi's approval of Macao's achievement in the past 20 years.

The teacher, who works at Saint Joseph University, said she has witnessed the massive development of Macao, which has changed from a "simple" to a modern city with sophisticated infrastructure.

"The city has become bigger, remains progressive and is good for families," Tagulao said.

Across the sea, people from Hong Kong — the nation's other special administrative region — also shared their thoughts on Xi's visit to Macao.

Given that Xi said he would listen to different people's voices and talk with those from all walks of life during his stay, Zeman said he expected they will discuss and announce several new policies aimed at diversifying the gaming-dependent economy of Macao.

The policies could include the establishment of an offshore yuan-denominated stock exchange and the acceleration of a yuan settlement center already in process, he said.

Zhang Yuge, director of the Center for Hong Kong and Macao Studies at the China Development Institute, said Xi's speech showed that Macao's development under the "one country, two systems" policy is firmly acknowledged by the central government.

He added that discussions between Xi and people of all walks of life in Macao would focus on ways to strengthen and consolidate Macao's position as "one center, one platform, one base". The principle describes the SAR's role as an international tourism and leisure center, a platform for trade cooperation between China and Portuguese-speaking countries and a base for exchanges and cooperation where Chinese culture is the mainstream and diverse cultures coexist.