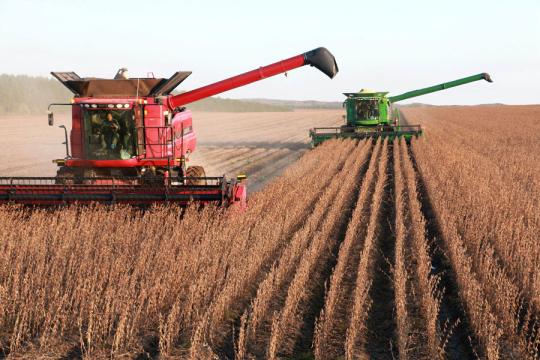 Soybeans are harvested in Heilongjiang province. (Photo by LU WENXIANG/XINHUA)

The United States and China have great synergies in agriculture technology, which benefits both sides, industry insiders say.

"There's a natural partnership between the U.S. and China. China is a huge market, and the U.S. is a huge producer of agricultural products and technologies," said Roger Royse, founder of the AgTech Innovation Network in Silicon Valley.

He said there is increasing demand in China for agricultural technologies, driven by a labor shortage and consolidation of farmland.

Rural residents in China are moving to the cities, which leaves fewer farmers. Most of the people who stay behind are under 16 or over 50, so automation has to step in and fill that gap, Royse said.

Another factor is China's growing middle class, whose changing tastes and demand for more nutritious food also drive the development and deployment of agriculture and food technologies.

"There are more people moving into the middle class, and their taste changes. They start eating more protein or more meat. As 7 to 10 pounds of plant creates 1 pound of protein, that increases the demand for increased output," said Royse.

"The only way you get increased output from the same or dwindling amount of land is by being more effective, and that's why precision agriculture is becoming so important in China now," he said.

Royse said that in the U.S., it's all about consumerism - that the consumers want is what drives products to the market.

"Consumers in the United States want traceability; they want to know what chemicals are in their food, what kind of labor went into producing the food, and where it's from. Then suppliers respond to demand, and they have to adopt new technologies in order to do that," he explained.

The same is happening in China as more people move into the middle class and become much more concerned about what they consume, he added.

"The technologies that are pretty commonplace in the U.S. will probably become popular in China, there'll be natural demand for it and that will benefit U.S. companies that are already used to deploying a certain technology," said Royse.

"The middle class in China is growing extremely fast, and people are eating better and eating the foods that they desire," he said. "China dominates because of demand, and the U.S. dominates in terms of our ability to produce agriculture products. That's why we have these great synergies, and the synergies have worked fantastic."

Roemer's company is focused on specialty grain sorghum with specific characteristics demanded by consumers. Two years ago, his company was connected with some Chinese liquor producers to develop specialty sorghum for baijiu, a Chinese liquor distilled from fermented sorghum.

It's a higher-value application for the grain, so Romer has been working with his Chinese partners, including Luzhou Laojiao Co and some professors from China's Jiangnan University, to better understand the grain's nutritional characteristics for that application.

"It's a very special, ancient grain. For a couple of thousand years, baijiu is being produced from that specific type of grain, but we have to understand what grain it was to be able to try to duplicate the same characteristics, so their products don't have variability," he said.

Another research aspect of Roemer's company is "sustainability and regenerative agriculture practices", which utilize fewer natural resources and reduce the amount of carbon released in grain production.

"Climate change is also a large part of the technology that we work with in our company. One simple example is a special sensor that measures the amount of carbon dioxide released during the production cycle of the grain. We can reduce those that are being expelled into the atmosphere," he said.

The U.S. and China are both leaders of the global efforts against climate change, which creates a natural synergy for companies from both sides to collaborate, he said.

Like Roemer's company, many farms deploying ag-tech depend heavily on sensors, which provide another area of cooperation, said Royse.

"I have a lot of companies that want to manufacture, but the big challenge in agriculture is getting the cost of the sensors down to be cheap enough that they can be applied to every plant," he said.