President: Nations not affected by interference 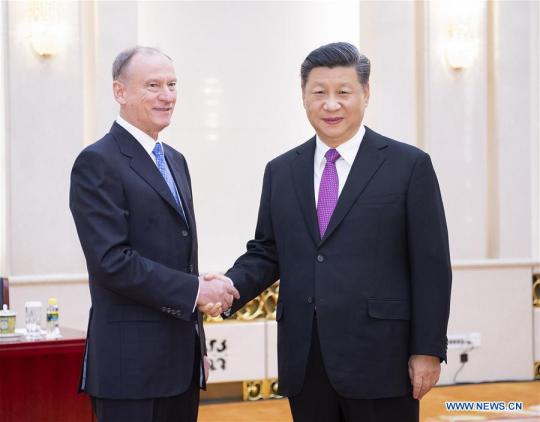 President Xi Jinping said on Monday that there is no power that can stop the Chinese people and the Chinese nation from moving forward.

He made the remark when meeting with Russian Security Council Secretary Nikolai Patrushev in Beijing, adding that he believes that the Russian people will not be affected by external interference either and will continue to firmly follow their own development path.

Xi said that this year, Western countries including the United States have increased their interference in the internal affairs of both China and Russia, which has threatened the two countries' sovereign security and impeded their economic and social development.

The president recalled that his Russian counterpart Vladimir Putin had described such acts as big mistakes that harm others without benefiting oneself, saying that China absolutely agrees with Putin in this regard.

He urged China and Russia to make good use of the platforms of strategic security consultation and cooperation in law enforcement and security to strengthen communication and enhance mutual trust, in order to safeguard each other's core interests, common security as well as regional and global peace and stability.

Xi said that the development of the China-Russia relationship has entered the new era as the two sides held celebrations for the 70th anniversary of establishing diplomatic ties.

Facing the complex and changing international situation, Xi called on the two countries to stand closely together and offer each other powerful strategic support.

Patrushev said bilateral cooperation has reached an unprecedented high level and the Russia-China relationship is unbreakable.

He said that the policies being pursued by the U.S. not only damage the interests of Russia and China but also have a negative impact on the whole international system and order.

Patrushev is in China to attend the sixth China-Russia meeting of institutionalized cooperation in law enforcement and security and the 15th round of the China-Russia strategic security consultation.