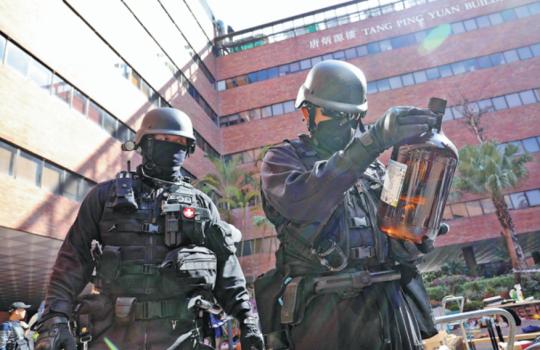 Hong Kong police officers clear the campus of the Hong Kong Poly technic University on Thursday. The campus was a flashpoint for clashes with radicals. (Photo/CHINA DAILY)

China said on Thursday that it will take powerful measures to counter U.S. actions that interfere in the country's internal affairs and harm its interests after United States President Donald Trump signed the so-called Hong Kong Human Rights and Democracy Act of 2019 into law.

"We strongly urge the U.S. side not to implement the act to avoid affecting China-U.S. relations and bilateral cooperation in key areas," Foreign Ministry spokesman Geng Shuang said at a regular news conference in Beijing.

When asked about details of the countermeasures, Geng said they will be made known to the public, but did not say when.

On the same day, Vice-Foreign Minister Le Yucheng summoned U.S. ambassador to China Terry Branstad. Le called the move stark bullying. The Chinese government and people express strong indignation and firm opposition to it, Le told Branstad, and the U.S. side must bear all the consequences resulting from China's resolute countermeasures.

Geng said the intention of the U.S. is very vicious, bolstering violent criminals who smashed facilities, attacked innocent residents and trampled on the rule of law and social order.

Its fundamental purpose is to destroy Hong Kong's prosperity and stability, undermine the great practice of "one country, two systems" and barricade the historical process of realizing the great rejuvenation of the Chinese nation, he said.

On Thursday, the government of the Hong Kong Special Administrative Region also expressed strong opposition to and extreme regret over Trump's signing of the bill, saying the U.S. move has absolutely nothing to do with Hong Kong human rights and democracy.

Saying the act, which is neither necessary nor justified, will send the wrong message to protesters, the HKSAR government said that it would not help ease the situation in Hong Kong.

The State Council's Hong Kong and Macao Affairs Office said on Thursday that the act is full of prejudice and arrogance and treats Hong Kong with intimidation and threats.

It blatantly offers protection to Hong Kong rioters and separatists, showing malicious intent, the office said in a statement, adding that the U.S. has been proven to be the biggest manipulator behind the chaos in Hong Kong. The city's future and destiny are always in the hands of the Chinese people, including Hong Kong compatriots, and no force can stop the Chinese nation from achieving great rejuvenation, it said.

The Liaison Office of the Central People's Government in the HKSAR warned the U.S. and a handful of opposition politicians in Hong Kong that they should not underestimate China's capability and means to defend its national sovereignty, security and development interests.

Leung Chun-ying, former chief executive of the HKSAR, said those who initiated the act never had Hong Kong's interests in mind.

"I don't think the U.S. congressmen who voted for the act were fully or correctly informed. It's a proxy thing. I don't think they had Hong Kong's freedoms, democracy and human rights in mind. It's all about China," Leung said.

The American Chamber of Commerce in Hong Kong, one of the largest U.S. business chambers outside the U.S. and the largest international chamber in the city, said that it had voiced concern about the possible unintended, counterproductive consequences of the act, including to U.S. business. "Hong Kong is just too special to fail," it said in an email.

Considering the close economic ties between Hong Kong and the U.S., Martin Liao Cheung Kong, convenor of pro-establishment lawmakers, said that the act will not only hurt the interests of Hong Kong people but also those of the U.S..

Tam Yiu-chung, a Hong Kong deputy to the National People's Congress Standing Committee, said that by signing the bill, the U.S. is using Hong Kong as a pawn to contain China, which will bring no good to the city and increase uncertainty for its economy.

Henry Tang Ying-yen, a Hong Kong member of the Standing Committee of the National Committee of the Chinese People's Political Consultative Conference, criticized the U.S. for using a double standard in handling foreign relations with other countries and urged U.S. politicians to focus on their own affairs.

Ruan Zongze, executive vice-president of the China Institute of International Studies, said one of the adverse impacts of the act is "encouraging" Hong Kong radicals to behave in a more unscrupulous way, which is unhelpful for halting the violence and restoring order in Hong Kong.

Li Haidong, a professor of U.S. studies at China Foreign Affairs University, said that making the bill into a law is a typical practice of "long-arm jurisdiction" by the U.S. to interfere in the internal affairs of other countries.

He said some U.S. politicians are doing whatever they can to take the China-U.S. relationship downward, which will lead to a substantial decrease of bilateral mutual trust.