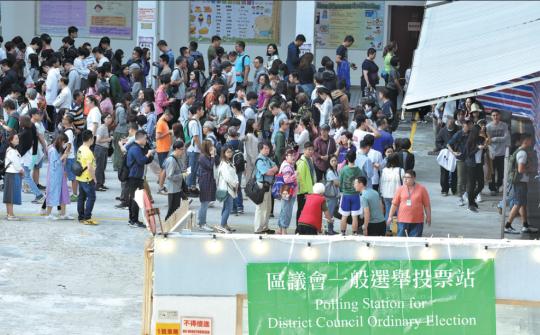 Voters line up outside a polling station during district council elections in the Hong Kong Special Administrative Region on Sunday. (Photo provided for China Daily)

Patience urged as long waits at polls discourage some, including seniors

The district council elections in the Hong Kong Special Administrative Region saw their largest turnout since 1982 on Sunday, with 2.85 million people — or 69 percent of eligible voters — casting ballots as of 9:30 pm.

A record 1,090 candidates were running for 452 district seats, and a record 4.13 million Hong Kong people were eligible to vote in the quadrennial elections for district councilors — the representatives who deal with community affairs.

Long lines of voters formed at some polling stations on Sunday morning. Election authorities said that as of 1:30 pm, more voters had cast ballots than the total number who voted in the 2015 district council election. Turnout in 2015 was about 47 percent.

Hong Kong Chief Executive Carrie Lam Cheng Yuet-ngor cast her vote shortly before 9 am. Lam said a smooth election is expected to break the current impasse and restore peace in Hong Kong. She appealed to every registered voter to cast a ballot on Sunday, stressing that the government will respect their choices.

Barnabas Fung Wah, chairman of the Electoral Affairs Commission, appealed to voters to be patient and respect others' right to vote. His admonition came after he noticed long lines at multiple polling stations.

"There is no need to cast your vote in a rush," he said, adding that any voter who had lined up before the polls closed at 10:30 pm would be allowed to vote.

Competition between the establishment camp and the opposition has been fierce. Analysts said the opposition wants to ride on the current political turmoil in Hong Kong to have a greater say in the district councils.

Starry Lee Wai-king, chairwoman of the Democratic Alliance for the Betterment and Progress of Hong Kong — the SAR's largest political party in the legislature — said on Sunday afternoon that her party is in a precarious situation.

She called urgently for all residents who long for peace to vote for her party's candidates in various districts.

Leung Kwok-hung, a former legislator from the opposition camp, competed with Lee in the same district. On Sunday, Leung disrupted Lee's press briefing and blocked her exit.

Lee expressed indignation over Leung's harassment and reiterated that the election should be fair.

A few candidates urged the Electoral Affairs Commission, Hong Kong's election watchdog, to keep a close eye on the situation around polling stations, as they said online calls to obstruct voting had been seen.

Gary Chan Hak-kan, vice-chairman of the DAB, said he saw a few people who had been in line to vote abandon the effort because of the long wait.

Pro-establishment lawmaker Elizabeth Quat Pui-fan said she had received multiple complaints from residents, including senior citizens, who gave in to fatigue after an extended wait.

Before the election, more than 100 councilors' offices were reportedly vandalized, with phone lines and network cables cut.

Holden Chow Ho-ding, a city lawmaker who was running for a seat on the Islands District Council, said his office had been vandalized four times. He expressed hope that people against violence, and who support the city's efforts to restore order, will use their votes to express themselves.

Casey Tong, a 22-year-old first-time voter living in Tin Wan, Hong Kong Island, said she hopes the councilor will really care about the interests of the neighborhoods, including young and old, and serve their needs well.

After casting his vote in Wan Chai in the morning, Peter Bentley, a Bri ton who has lived in Hong Kong for nearly 40 years, called on all voters to support candidates who firmly reject violence. He said he was shocked by the rampant violence on the streets in the past several months.