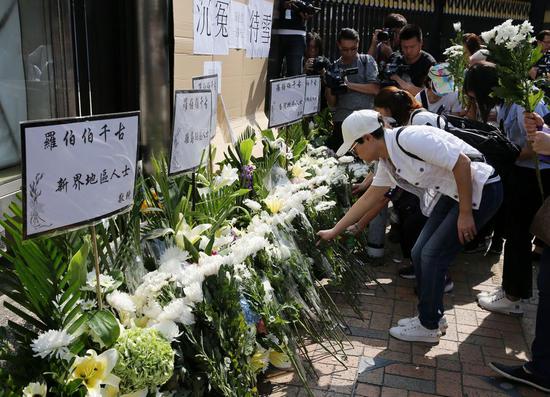 A memorial service is held on Nov. 15, 2019 in south China's Hong Kong by local residents for a senior sanitation worker killed by rioters with bricks. (Xinhua)

Some 30 residents in the Hong Kong Special Administrative Region on Friday mourned the death of a man, 70, who was struck by a brick that was thrown two days earlier, as violent protests continued to disrupt traffic and cause damage in the city.

A number of other people have been injured, some seriously — including a man who was recently set afire by radical protesters and remains hospitalized — since violent clashes and social unrest erupted in the city beginning in June.

On Friday afternoon, a public memorial ceremony was held in Sheung Shui for people to send their condolences for the passing of the elderly cleaner, who died in a hospital on Thursday night.

The victim was filming a conflict between rioters and people clearing barricades, according to Hong Kong police.

The case has been under investigation and classified as a homicide by authorities.

Some CCTV cameras around the scene were damaged by rioters, which caused difficulties in the investigation, Senior Superintendent Chan Tin-chu of New Territories North Regional Crime Headquarters said at a Friday news briefing. Chan pledged that police will pursue the case at all costs to bring the perpetrator to justice, and called on witnesses to come forward.

The SAR government expressed outrage over the malicious acts of rioters on Friday.

In a statement, the government's Food and Environmental Hygiene Department expressed profound sadness at the passing of the man and said it is now providing assistance to his family.

The Liaison Office of the Central People's Government in the HKSAR said the "inhumane and indiscriminate atrocity" is absolutely unacceptable. On Friday, the office said violence must be stopped immediately to avoid more injuries.

Expressing deep condolences, to the family of the deceased, the office reiterated its firm support for the SAR government and for the police to bring offenders to justice.

In London, police told local media on Friday that it is investigating an attack on Hong Kong's Secretary for Justice Teresa Cheng Yeuk-wah. In a statement reported by Sky News, the Metropolitan Police said: "A woman was taken to hospital by London Ambulance Service suffering an injury to her arm."

In a statement, Cheng said radical protesters attacked her on her way to an event. She said she fell down and the mob shouted at her in Cantonese. She said she immediately filed a report with London Police and requested local authorities take the case seriously and bring the culprits to justice.

On Thursday, President Xi Jinping said the top task for Hong Kong is to bring violence and chaos to an end and restore order. Xi made the remark at the 11th BRICS Summit in Brazil Thursday.

Xi chose to make the statement at the BRICS Summit as it sends a message to the world that China is determined to stop the violence, said Hong Kong business tycoon Allan Zeman, chairman of the Lan Kwai Fong Group. He said Xi's words would reassure Hong Kong society on the central government's support for the HKSAR.

Chief Executive Carrie Lam Cheng Yuet-ngor on Friday expressed outrage at the attack on Cheng. Saying the attack was barbaric and violated the principles of a civilized society, Lam said the act should be strongly condemned. She expressed hope that local police will follow up on the case thoroughly to bring the offenders to justice.

In a daily news conference on Friday, the Foreign Ministry requested the United Kingdom immediately follow up on the case and bring the offenders to justice in order to safeguard the safety and dignity of all Chinese citizens in the UK.

The SAR government has set up an interdepartmental coordination team chaired by Chief Secretary for Administration Matthew Cheung Kin-chung to deal with the current social unrest and introduce more decisive measures to end the violence, Cheung said at a news conference on Friday.