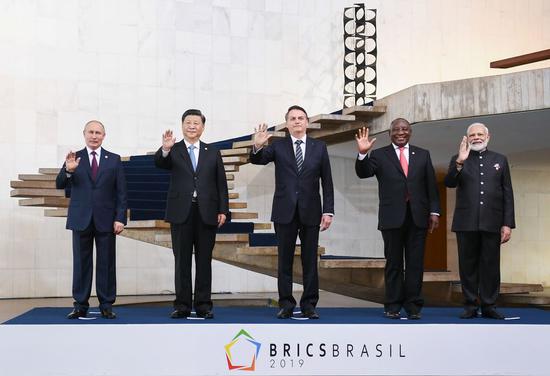 The BRICS leaders pose for a group photo at the 11th summit of BRICS in Brasilia, Brazil, Nov. 14, 2019. (Xinhua/Xie Huanchi)

From Sunday to Thursday, Xi paid a state visit to Greece at the invitation of Greek President Prokopis Pavlopoulos, and attended in Brasilia the 11th summit of BRICS, an emerging-market bloc that groups Brazil, Russia, India, China and South Africa.

In face of profound changes unseen in a century, added Wang, the trip has once again demonstrated China's responsible role as a major country in the world and commitment to working with its partners to build a community with a shared future for mankind.

Since the establishment of diplomatic relations 47 years ago, China and Greece have always been understanding and respecting each other, and firmly supporting each other on their respective core interests, Wang said.

The Piraeus Port project is a paragon in international cooperation under the Belt and Road Initiative, Wang said, quoting Xi as saying that the cooperation fruits will continue to benefit the people of both countries and the region, and the China-proposed initiative is not a slogan or tale, but a successful practice and brilliant reality.

Xi's trip to Greece marked yet another shining moment of interaction between Eastern and Western civilizations, demonstrated the beauty of harmonious coexistence of the two great ancient civilizations, and helped promote exchanges and mutual learning between different civilizations, Wang said.

The senior diplomat recalled that Greece, an important member of the European Union, was accepted in April as a full member of the cooperation mechanism between China and Central and Eastern European Countries (CEECs).

During his trip, Xi rejected those allegations concocted to drive a wedge between China and Europe, and reaffirmed the Chinese government's staunch support for a united, stable, prosperous and strong Europe, Wang noted.

Greek leaders, he added, agreed that the China-CEEC cooperation mechanism helps link Greece and the broader Europe with China more closely, and pledged that their country stands ready to further advance Europe-China relations.

The BRICS summit in Brasilia, said Wang, came as crucial developments are taking place in the world economy and international landscape.

The Brasilia Declaration reaffirms the BRICS nations' commitment to upholding the purposes and principles of the UN Charter, championing multilateralism, and seeking political settlement of hotspot issues, he said, adding that it has brought stability into the current unstable international situation.

Meanwhile, Xi urged the BRICS members to seize the opportunities that come with reform and innovation, deepen the BRICS Partnership on New Industrial Revolution, and strive for more productive cooperation in such fields as digital economy and connectivity, noted the state councilor.

Wang also highlighted Xi's call on the BRICS countries to leverage "BRICS Plus" cooperation as a platform to increase dialogue with other countries and civilizations and win BRICS more friends and partners.

For the first time, the leaders of the BRICS nations put membership expansion of the New Development Bank on the group's agenda, indicating that "BRICS Plus" cooperation has achieved important progress in key areas, said Wang.

Amid crucial developments in the world economy and international landscape, Xi also shared with the world China's successful experience and presented Chinese solutions that meet the expectations of the international community and accord with the common interests of all parties, noted Wang.

The trip also reaffirmed China's readiness to share its development opportunities with the world, said Wang, recalling Xi's pledge that China will continue to follow a high-standard, people-centered, and sustainable approach to promote high-quality Belt and Road cooperation with partner countries.

Recalling that in 2019 Xi has paid seven overseas visits and hosted four major diplomatic events in China, Wang said these activities have fully displayed the great achievements the Chinese people have made since the founding of the People's Republic of China 70 years ago, and the comportment of major-country diplomacy with Chinese characteristics.

Looking ahead, Wang said that under Xi's leadership, Chinese diplomacy in the new era will certainly lead to an even more extraordinary future.