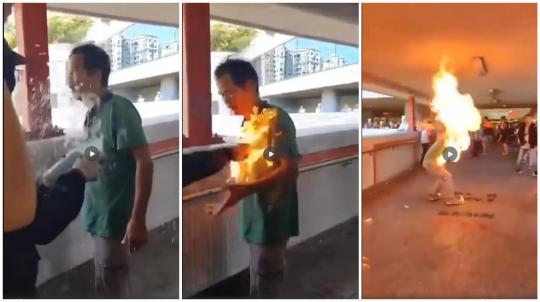 A man who had a quarrel with rioters is doused with inflammable liquid and set on fire in Hong Kong on Monday. (PHOTO PROVIDED TO CHINA DAILY)

Hong Kong witnessed one of the most disturbing incidents on Monday amid the ongoing protests that first erupted in mid-June, as a man was set on fire by a masked radical.

As seen in a video circulating online, the man's clothing was ignited by a radical protester after he was doused with what is believed to be an accelerant as he quarreled with several others on a footbridge in Ma On Shan, New Territories.

During the confrontation, the man, wearing a green shirt, argued with the protesters and told them they were all Chinese, the video showed.

He ended up suffering severe burns and is in critical condition in a hospital. The attacker is believed to have escaped.

Earlier, the green-shirted man was seen trying to stop some protesters from vandalizing Ma On Shan MTR Station, another video showed.

Hong Kong Special Administrative Region Chief Executive Carrie Lam Cheng Yuet-ngor stressed on Monday that the SAR government will not yield to the violence of rioters and accede to their demands. The rioters will never succeed, she said.

"If there's still any wishful thinking that by escalating violence, the Hong Kong SAR government will yield to pressure to satisfy the so-called political demands, I'm making this statement loud and clear here — this will not happen," Lam said.

She made the remark while addressing a news briefing after citywide riots caused dozens of injuries among residents on Monday.

Lam reiterated that violence will not provide any solution to the current problems of Hong Kong. She called on all people in Hong Kong, regardless of their political views, to agree that the priority was to stop the violence and restore calm in the city as soon as possible.

In a news conference on Monday afternoon, police confirmed the attack on the man and called it "inhumane".

Strongly condemning the attack, a police representative criticized the suspect for "disregarding the life of others to make a political stand".

Police are investigating the case. As of 6 pm Monday, no one had yet been arrested, police said.

The attack was condemned by prominent figures. Solicitor Kennedy Wong Ying-ho said the incident is "absolutely shocking" as the radical attacked someone who did not even have any physical conflict with him.

He noted that the perpetrator could be charged with attempted murder, which carries a maximum penalty of life imprisonment.

Urging the rioters to show more respect for others' safety, Lau also called for more powerful and effective measures from authorities to quell violence and uphold public safety.

Fresh round of violence

Besides setting fires at Hong Kong Polytechnic University, they also vandalized facilities at Hong Kong Baptist University where they targeted shops such as Pacific Coffee and a school canteen owned by restaurant chain Maxim's.

Pacific Coffee is owned by a mainland group, and the eldest daughter of Maxim's founder recently voiced opposition to violence by the protesters.

On Monday morning, two gasoline bombs were thrown into a train car full of passengers at Kwai Fong Station.

Twenty-five MTR stations had to shut down temporarily and several metro lines suspended service, MTR Corp said in a statement.

Because of the mayhem on Monday, nearly all universities in the city suspended classes.