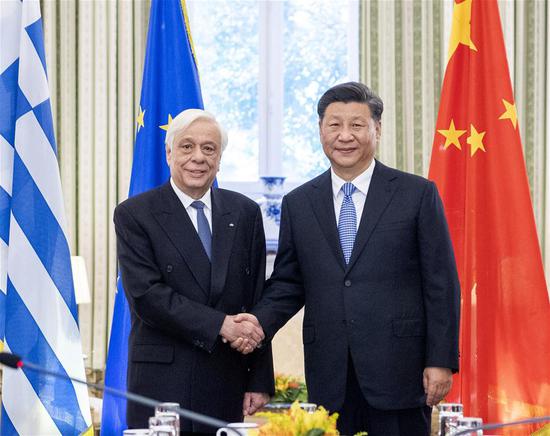 China and Greece should work together to construct the Belt and Road and build China-Europe land and maritime routes into key channels for cargo transportation, President Xi Jinping said on Monday.

Xi made the remark while meeting with Greek President Prokopis Pavlopoulos in Athens amid his ongoing state visit to the Mediterranean nation.

The two leaders agreed to strengthen mutual political trust, deepen practical cooperation and contribute their wisdom as ancient countries to the building of a community with a shared future for mankind.

China and Greece, both being ancient civilizations, uphold similar beliefs and have achieved their own modernization through hard work, Xi said, adding that mutual learning is a fundamental need for the development of civilizations.

The world is undergoing great changes unseen in the past century, and the two countries should deepen cooperation, promote exchanges among their civilizations and stimulate the building of a more reasonable and fairer international order, Xi said.

Xi called on the two countries to set a leading example for Sino-European cooperation through boosting openness and expanding practical cooperation.

China would like to make joint efforts with Greece to promote cooperation between China and Central and Eastern European countries, Xi said.

Xi reaffirmed China's stance on exchanges between different civilizations, saying that mankind should pursue morality rather than egoism.

China will never seek hegemony, nor will the country approve the concept of a zero-sum game, because Chinese people don't possess such cultural genes or ambitions, Xi said.

Both China and Greece support mutual exchanges and mutual learning, and both sides oppose the absurd theory of conflicts among civilizations, Xi said.

The two countries should also make coordinated efforts to maintain multilateralism, enhance coordination on major global issues, enhance multilateral cooperation under such frameworks as the United Nations and remain dedicated to building a community with a shared future for mankind, Xi said.

Pavlopoulos said that Greeks naturally have friendly feelings toward Chinese as both countries are ancient civilizations.

It is great to see that the People's Republic of China has made such outstanding achievements over the past 70 years, he said.

Both Greece and China promote dialogue among civilizations, and Greece firmly opposes the so-called theory of civilizational conflict because real civilizations will not cause conflicts, Pavlopoulos said, adding that conflicts will not resolve problems.

Xi also met with Greek Prime Minister Kyriakos Mitsotakis on Monday and the two jointly witnessed the signing of a number of cooperation documents covering such areas as investment, ports, finance, energy and education.

China will take firm steps to boost opening-up, and the country would like to bring more opportunities to all countries, including Greece, Xi told Mitsotakis.

China and Greece should connect the building of the Belt and Road with Greece's strategy of building an important international logistics hub, Xi said.