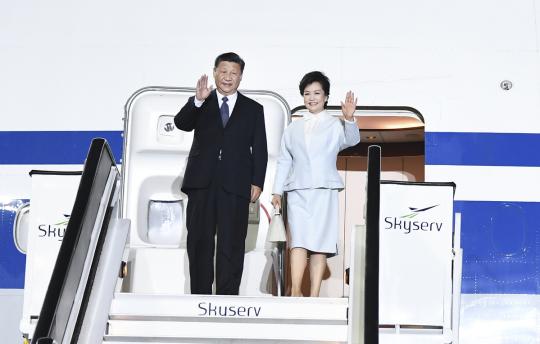 President Xi Jinping said on Sunday that his state visit to Greece should open a new chapter in the nations' comprehensive strategic partnership.

He made the remark in a written statement released upon his arrival in Greece, which he is visiting until Tuesday at the invitation of President Prokopis Pavlopoulos.

It is the first official visit to the European country by a Chinese president for 11 years.

Calling Greece a country with a time-honored history and splendid culture, Xi said the nation has made an outstanding contribution to the progress of human civilization.

And he said Greece's government and its people have worked hard to overcome hardships and make progress in recent years and he noted that the Chinese people welcome the nation's achievements.

Xi said China-Greece relations have gone "from strength to strength", as evidenced by close high-level exchanges, deepening political trust, and fruitful Belt and Road Initiative cooperation that has resulted in the development of the Port of Piraeus.

The nations' efforts have not only benefited China and Greece but also contributed to the peace, stability, development, and prosperity of the world, he added.

During his visit, Xi is set to hold talks with Pavlopoulos and Prime Minister Kyriakos Mitsotakis.

The two countries are expected to issue a joint statement on strengthening their comprehensive strategic partnership, sign cooperation documents about investment and education, and ink commercial agreements in areas including ports,finance, and energy.

Greece was among the first European Union countries to sign an intergovernmental cooperation document with China in support of the Belt and Road Initiative.

In April, Alexis Tsipras, who was prime minister at the time, attended the second Belt and Road Forum for International Cooperation in Beijing.

Earlier this month, Mitsotakis led a delegation to the second China International Import Expo in Shanghai where he was met by Xi.

Greece has also since April been a full member of the cooperation mechanism between China and Central and Eastern European Countries.

In a signed article in the major Greek newspaper Kathimerini, or The Daily, on Sunday, Xi praised the deep bonds between the two ancient civilizations and pledged to build an even stronger connection between them.

He said he was visiting the beautiful country "with great respect for civilizations and high expectations for a bright future".

Xi made a stopover on the Greek island of Rhodes in 2014 and "was deeply impressed by the ancient and rich Greek civilization and the hardworking and talented Greek people".

China's president said in the article that the nations have much in common and quoted Nikos Kazantzakis, a giant of modern Greek literature who twice visited China, as saying that "Confucius and Socrates were two masks that covered the same face of human logic".

He said great civilizations understand each other and stand by one another and noted that Greek ship-owners were among the first to breakthrough a blockade and take much-needed supplies and equipment to the People's Republic of China shortly after its founding in 1949. And, when Greece was plagued by economic and debt woes a decade ago, China provided wholehearted assistance to help its friend.

Xi said the two countries have always treated each other with respect and trust, and have developed their relationship with long-term vision, especially since they established their comprehensive strategic partnership in 2006.

He said China and Greece have pursued mutually beneficial cooperation, achieved fruitful outcomes in trade, investment and infrastructure cooperation, and worked together to turn Piraeus port into the massive hub it is today.

"The growth of China-Greece relations is testimony that ancient civilizations are capable of dynamic, mutually beneficial cooperation in modern times," he said.

Xi stressed that the nations have reached a new stage of development, which presents a golden opportunity for expanding ties, and said he hopes to work with Greek leaders to map out an even brighter future.

And he said China is ready to import more high-quality agricultural products from Greece and hopes Greece will open its market wider to Chinese companies.