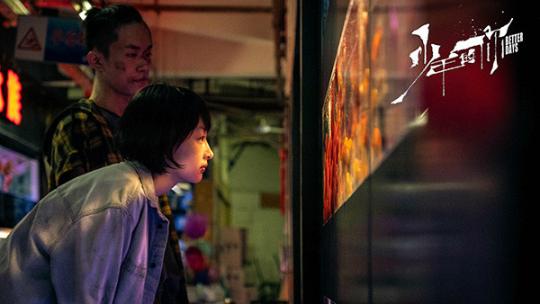 A still image of Better Days, which has become a dark horse since it opened across Chinese mainland on Oct 25. (Photo provided to China Daily)

The blockbuster movie Better Daysbrought school violence to big screens over the weekend in a rare attempt by Chinese filmmakers to focus on the nationwide problem, which has existed for years.

However, parents have only recently begun to address the issue after a series of media reports focused attention on it.

Featuring top stars Zhou Dongyu and Yiyang Qianxi (also known as Jackson Yee), the movie tells the story of a high school student who is harassed on campus and later becomes caught up in a murder.

It contains several scenes of violent bullying and bloodshed.

Adapted from the novel Young and Beautiful by Jiu Yuexi, it proved an instant commercial success after opening in theaters on Friday.

This was less than a week after lawmakers looked to legislate against bullying and threats, both online and offline, in the Minors Protection Law, aimed at those under 18.

Figures from the China Movie Data Information Network show the film led in box-office receipts on the Chinese mainland on Sunday, raking in 196 million yuan ($28 million). Trailing were the Disney fantasy film Maleficent: Mistress of Evil and The Captain, which portrays an emergency landing by a Chinese airliner last year.

Although a constant theme for Japanese and South Korean films, school bullying has been largely ignored by mainland moviemakers.

Cry Me a Sad River, released last year and adapted from a novel by best-selling writer Guo Jingming, is among the few domestic films that have touched on the issue.

In recent years, the public has been shocked and angered by online video clips showing schoolchildren being assaulted, humiliated and verbally abused by groups of youngsters in classrooms, backstreet alleys and even bathrooms, to evade teachers' attention.

Such clips are usually removed from Sina Weibo and other social media platforms, for fear of inciting copycat incidents or secondary injuries being inflicted.

One video that circulated recently involved a 16-year-old schoolgirl in Jiangsu province who was slapped in the face and forced to kowtow following a row while switching seats in a classroom. The incident was recorded by those responsible and shared online in an apparent attempt to humiliate the victim.

In 2015, a report by China Central Television focused on the distress and trauma experienced by students who had been bullied.

It told the story of a 14-year-old student from Shandong province who jumped from the fourth floor after several classmates repeatedly prevented him from using the bathroom. The student severely injured his back and legs.