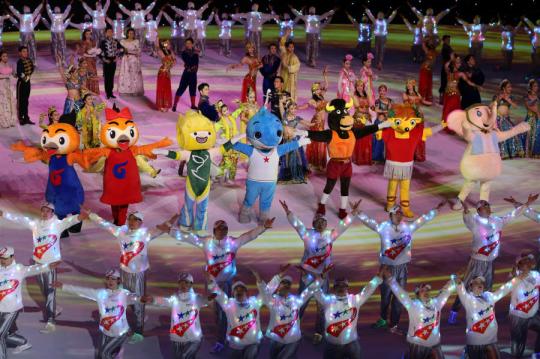 Performs are presented in the closing ceremony of the 7th Military World Games in Wuhan, Hubei province, on Sunday night. (Photo provided by Wang Zhuangfei from China Daily)

China's hosting of the 7th Military World Games, which concluded in Wuhan, Hubei province, on Sunday night, conveys a message of peace and spreads friendship and solidarity on a global stage, experts and officials said.

The Games, which kicked off on Oct 18, represent China's first time hosting a comprehensive international military sports event, with a record 9,308 military athletes from 109 countries participating in 329 events in 27 sports.

"China is a great country — as much a big power in politics and economics as in sports," said Herve Piccirillo, president of International Military Sports Council, the main organizer of the Games. He added that China as host demonstrates the country's commitment to world peace and its aim to spread friendship and unity.

The Military World Games were created to connect different countries, cultures and continents and allow them to meet on sports fields instead of battlefields, Piccirillo said. In this way, they share the values of "friendship through sport".

The first Games took place in Italy in 1995 to commemorate the 50th anniversary of the end of World War II and the creation of the United Nations. Since then, the Games have been held every four years, with sports council member nations sending military athletes to compete. Sports such as swimming, basketball and volleyball have been included, as well as five events featuring military characteristics: military pentathlon, aeronautical pentathlon, naval pentathlon, parachuting and orienteering.

The skills needed for events such as the obstacle course, lifesaving, seamanship, shooting and fencing, are adapted to combat capabilities in modern operations.

The Games not only provide a platform for different militaries to exchange and share common values of peace, friendship and unity but are particularly important for young soldiers, the major component of militaries, to be aware of their responsibility to maintain peace in the world, Piccirillo said.

"Military people are special, not quite like others," he said. "They are committed to defending their country but also share the concept of peace — and that is what brought us together, whatever our origins, whatever our cultures."

The Chinese military has placed great importance on this year's Games and sent its largest sports contingent in history, with 553 members, including 406 athletes participating in all sports except golf.

They delivered outstanding performances, topping the medal tally with 133 gold medals, 64 silver and 42 bronze. They have also broken a number of records for the Games, as well as set world records.

The People's Liberation Army's aeronautical pentathlon and naval pentathlon teams made their debuts in the Military World Games, and they have pocketed all possible medals in those two events.

Colonel Dorah Mamby Koita, secretary-general of the sports council, said China's outstanding performance is the result of the efforts of both the organizers and athletes. Many military athletes will make contributions to the development of world sports in the future because they will appear in the 2020 Olympic Games.

China's military sports began developing in the 1950s, when the PLA established its first professional sports team — PLA Bayi Sports Work Brigade in 1951. Lu Ting, the first political commissar of the team, recalled that living conditions were very poor in the beginning. They had no barracks and had to live in a stadium's warehouse, residential courtyards in Beijing's hutong areas and a construction shed belonging to the public security bureau. Nevertheless, Lu said, all athletes kept high spirits in training.

With the development of the brigade, PLA athletes began to play a key role in international competition. Chen Jingkai, a weightlifter, was China's first athlete to break a world record in 1956. Ma Yanhong from the PLA Bayi gymnastics team, was China's first gymnastics world champion in 1979, and PLA speed skater Ye Qiaobo won China's first medal in a Winter Olympics in 1992.

In 1978, the PLA officially joined the sports council, marking the starting point of exchanges with other countries' military units. In 1981, the PLA Bayi Military Pentathlon team participated for the first time in the World Military Pentathlon Championship, and in the following six Military World Games, China was among the top three gold medal winners.

In recent years, the PLA has worked to enhance its combat capabilities. The military sports teams have also undergone some restructuring to boost their competitiveness and have spread more sports talent to the ranks.

Last year, the previous 22 professional sports teams of the Bayi Sports Work Brigade were restructured into a military sports training center, directly under the training and management department of the Central Military Commission.

The center now has 29 sports teams, with a few of them newly established, including the one for aeronautical pentathlon and naval pentathlon, which were founded in 2015 and 2017.

According to Senior Colonel Cao Baomin, spokesman for the Chinese delegation at the Wuhan event, the restructuring has helped centralize management, optimize strengths and intensify resources.

The new military training outline, published in 2018 as part of the reform, also marks a milestone in the development of China's military sports, Cao said.

"Military sports is an important manifestation of the soft power of the military," he said. "Military athletes fighting to win on sports fields to earn glory for their country can greatly boost grassroots forces' spirit and desire to train harder."

He said China's hosting the games shows the world a major power willing to rise peacefully, taking responsibility, and determined to pursue and maintain peace. He added that China also plays a positive role in promoting international military sports and military diplomacy.

This year was the first time the Games were held outside military camps, with many events taking place at universities or in stadiums open to the public. Cao said the Games also helped members of the public gain a deeper understanding of military sports, raise the awareness of fitness and build their sense of patriotism.

To make sure the Games would be successful, Chinese organizers set the organizing standards higher, including building the first athletes' village in the Games history, providing one-on-one volunteer services for each group and constructing and refurbishing sports venues and facilities.

Piccirillo said the success of games in fact depended critically on the preparation period. He noted that the collaboration between Wuhan, Chinese military and the sports council is of "remarkable quality". He said all facilities met high-level international standards, which contributed to the many records set during the games. About 80 were Games' records — a "huge" number, he said.

"We have seen that Wuhan has applied all its means and mobilized all its resources, whether it's the infrastructure, the athletes' village, the reception of delegations or the mobilization of volunteers to make sure that the Games were a success. It is the determination, the commitment and the teamwork quality between Wuhan, the Chinese military and the sports council that secured a success even before the start of the Games," he said.

Piccirillo said after the "unprecedented mobilization" of Wuhan to organize the event, there are close ties of trust that will continue between the sports council and the city.

"It is our joint responsibility to continue these exchanges between militaries, member nations of the sports council and the people of Wuhan to carry this message of peace, especially for young generations," he said.

The Games also earned praise from foreign officials and experts, who said it provided a platform for exchanges and mutual learning for the military personnel of different countries.

Adhere Cavince, a Kenyan international relations expert with a focus on China-Africa relations, said the event shows that China does not seek to use its military power to harm, threaten or coerce other nations to do its bidding in the international arena.

Brigadier General Hazim Ali Ibrahim, head of the sports sector of the Egyptian Armed Forces, said China's preparation and organization of the games was "world-class". With Egypt sending the largest delegation in its history to the Games, he said, Egypt has enhanced friendship and cooperation through this event.