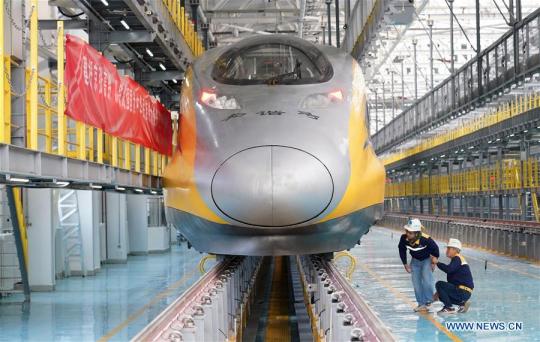 Trains running on the Beijing-Zhangjiakou High-speed Railway reached a record speed of 385 kilometers per hour, 10 percent higher than the designed speed, in a test run carried out on Sunday, reported Chinanew.com.

Linking Beijing and Zhangjiakou in the northern province of Hebei, the 174-kilometer railway scheduled to go into operation by the end of the year will shorten the travel time between the two cities from the current three hours to less than one hour.

With a designed top speed of 350 km/h, the line is expected to be the world's first autonomous, driver-monitored railway. Joint debugging started earlier this month at a maintenance station in Changping District in Beijing to check all aspects of its operation through dynamic testing, and the train finally achieved the running speed of 385 km/h after adjustments. Real-time data analysis from the monitoring center showed it performed well during the running process. More detections and examinations will be carried out for the whole line in subsequent tests.

According to the China Railway Electrification Bureau Group, the whole railway line will be equipped with intelligent substations, which can monitor the status of running trains in real time and deal with malfunctions online, improving the stability and safety of train operations. A variety of intelligent robots will also be used at high-speed rail stations to guide passengers and help them carry their baggage.

It represents an important project for the 2022 Beijing Winter Olympic Games, and also has significant meaning for enhancing the integrated development of Beijing, Tianjin and Hebei province, as well as connecting the western region of the country.