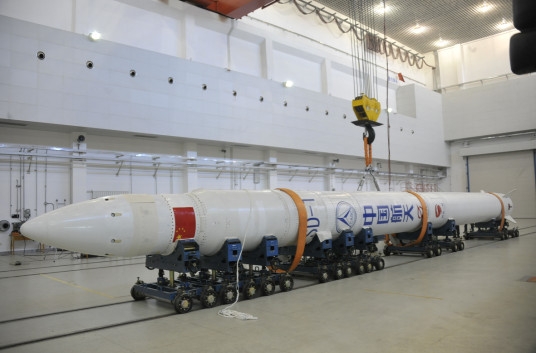 The SD 1 Y1, the first in the solid-propellant SD 1 series, blasted off at 12:11 pm from a large launch vehicle and thundered into blue skies on August 17, 2019. （Photo by Wang Shen for chinadaily.com.cn）

ChinaRocket, a commercial space wing of the China Academy of Launch Vehicle Technology, the country's leading rocket-maker, has unveiled its plans to develop a number of carrier rocket models to tap the space launch market.

The company announced on Saturday that its researchers are designing two types of solid-propellant carrier rockets — Smart Dragon 2 and Smart Dragon 3 — and at least one liquid-propellant type, the Flying Dragon 1.

The SD-2 will be 21 meters tall with a diameter of 2 meters, and will have a liftoff weight of 60 metric tons. It will be capable of carrying a 500-kilogram payload to a sun-synchronous orbit at an altitude of 500 kilometers. Flight tests are to begin next year.

The SD-3, with a total length of 31 meters, a diameter of 2.6 meters and a liftoff weight of about 116 tons, will be capable of sending more than 1.5 tons to the same orbit. Its maiden flight is penciled in for 2021.

Tang Yagang, president of ChinaRocket, said at a news conference in Beijing that the company will strive for annual production of up to 10 SD-2s and eight SD-3s to meet demand from the burgeoning commercial space industry.

The SD-1, the first in the series and the youngest member of China's carrier rocket family, made its debut flight in August from northwestern China's Jiuquan Satellite Launch Center, successfully placing three satellites into an orbit about 550 kilometers above Earth.

The SD-1 is 19.5 meters tall, has a diameter of 1.2 meters and weighs 23.1 tons. The rocket can place multiple satellites with a combined weight of 200 kg into a sun-synchronous orbit 500 km above the ground. It is China's smallest and lightest carrier rocket.

The SD series is designed to provide reliable, convenient and economic launch services for commercial satellite enterprises to build their networks or test their equipment, Tang said.

The FD-1 will be a medium-lift, liquid-fuel rocket that is reusable. It is currently in the detailed planning phase. Designers expect the rocket to ferry medium-size and large satellites, or several small satellites. The first flight is planned for 2021, he said.

In another development, iSpace, the first private company in China to have fulfilled an orbital mission, said last week that it is designing a reusable rocket that will be the first of its kind in the country to be built by a private enterprise.

The SQX-2 will be 28 meters tall, have a diameter of 3.35 meters and a liftoff weight of about 90 tons. It will be capable of sending a 1.9-ton satellite to a low-Earth orbit or a 1.1-ton payload to a 500-km sun-synchronous orbit.