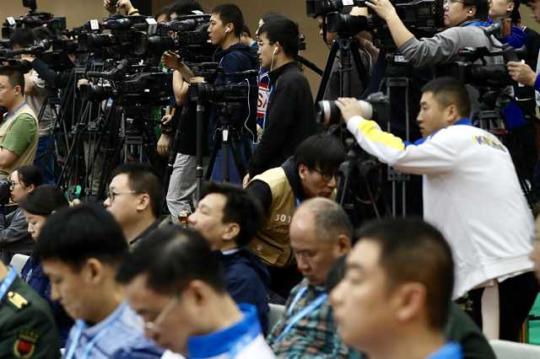 News conference for the 2019 CISM Military World Games is held in Wuhan, the capital city of Hubei Province, Oct 17, 2019. (Phot/chinadaily.com.cn)

Countries participating in the 2019 CISM Military World Games, which will open on Friday in Wuhan, the capital city of Hubei province, have sent strong teams of athletes with many world champions or high-ranked players at the Olympic Games, according to the director of the games' executive committee on Thursday.

Also known as the Military Olympic Games, this year's event has seen record high numbers of participants and sports events, with 9,308 athletes from 109 countries signed up for the games. They will compete in 329 events of 27 sports, including the naval pentathlon, aeronautical pentathlon, shooting, swimming and basketball. Among the 27 sports, tennis and gymnastics are demonstration sports.

Of all the athletes, 67 have won titles at the Olympics, World Championships and World Cup in different sports, while 118 were ranked in the top eight at the 2016 Olympic Games in Rio de Janeiro. Of the five military sports, including the military pentathlon, parachuting and orienteering, 43 participants are defending champions of the last military games in South Korea.

This year's games are expected to be "intensely competitive", said Major General Yang Jian, president of the games' executive commission.

As introduced by Yang, who is also the deputy director of the Central Military Commission's training management department, China attaches great importance to the games and formed the largest sports delegation of 553 people. They will participate in all the sports except golf.

"The 406 athletes of the delegation have received intensive training before the competitions. They have high morale and spirits. They will make sure to compete with their best performance and strive to achieve excellent results," he said, adding that according to the PLA delegation's previous performances and experiences in international military sports events, Chinese players have certain strengths in the military pentathlon, parachuting, track and field, shooting, swimming and basketball.

"Of course athletes in other events have no fear in competing with strong opponents to earn honors for their country and themselves, and we should show them respect," Yang said.

Twenty-five countries including Russia, Brazil, France, Germany and Poland have sent delegations of more than 100 members to the games.

Yang said the participating delegations have all been preparing for the games actively in order to achieve good results.

It is the first time that the games, organized by the International Military Sports Council every four years, will be held in China since the first event in 1995.