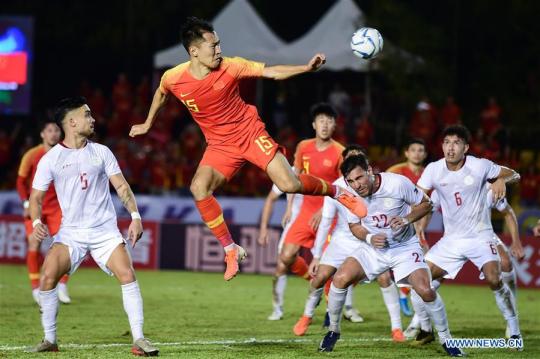 Wu Xi (Top) of China heads for the ball during the group A match against the Philippines at the FIFA World Cup Qatar 2022 and AFC Asian Cup China 2023 Preliminary Joint Qualification Round 2 in Bacolod, the Philippines, Oct 15, 2019. (Photo/Xinhua)

The scoreless draw with the Philippines in Tuesday's World Cup qualifier has put Team China in a tenuous situation.

While Syria blanked Guam 4-0 the same evening to earn three points and go atop Group A, the 0-0 draw in Bacolod dropped Marcello Lippi's China squad to second place.

The result has placed extra pressure on China's away clash against Syria on Nov 14 at an as-yet undecided venue. Victory against the group leader would get China back on track in its bid to secure a spot in the 12-team second round of Asian zone qualifying, comprised of the eight group winners and the four best second-place finishers.

Team China got its campaign off to a flying start, blasting the Maldives 5-0 last month and romping to a 7-0 victory over 195th-ranked Guam last week. On Tuesday, however, former English Premier League goalkeeper Neil Etheridge, who plays with second-tier Cardiff City, was impenetrable behind a rock-solid Philippines defense.

The result disappointed fans who expected another victory after China's 3-0 and 2-0 victories over the same opposition, at January's Asian Cup and in a June friendly.

Topics related to Tuesday's stalemate, had been viewed 58 million times on Weibo by Wednesday morning, with most fans expressing concern that China will once again miss out on competing in a World Cup finals.

"On a slippery pitch, the host Philippines finished the match with a draw against Team China that played miserably," renowned sports commentator Han Qiaosheng posted on Weibo.

"It's the first time in 104 years that the Philippines have held China scoreless. The last time was in 1915."

Team China's Italian coach Lippi, who was unable to steer the squad into the 2018 World Cup, rued his team's multitude of missed chances.

"We cannot win all the games with a 8-0 or 5-0 result," Lippi said through an interpreter.

"Our team created many opportunities, but failed to seize them. We should be better able to convert the chances we get.

"The team combined better in the second half after not being aggressive enough in the first half. The Philippines played with a lot of energy and posed us a lot of problems, especially their defense.

"Still, I saw an improvement and growth in our team, and we had better pace.

"Maybe the big victories in the first two qualifiers made our players think we could win the match easily. We must try harder to win the next game to realize our goal of entering the next stage."

Star striker Wu Lei of Spanish side Espanyol was guilty of wasting numerous scoring opportunities, while the Brazil-born Ai Kesen looked lethargic and struggled to break down the host's stubborn defense.

"Their tactic was to use five defenders, so there was only a tiny bit of room for our forwards," said Team China goalkeeper Yan Junling.

"Also, we faced a tough physical game, so we failed to created many good opportunities.

"Another reason was the pitch condition, which was rough and slippery. That made it hard for our players to pass the ball. But there's no excuse for us ... we just failed to win."

"Actually, in the locker room, the coach said we played good but we were not lucky this time," he said.

"However, not being lucky enough should never be a legitimate reason for the result.

"We should try harder to win the next match. Every time we lose such chances, it makes it more difficult for us to reach our final goal of qualifying for the World Cup."