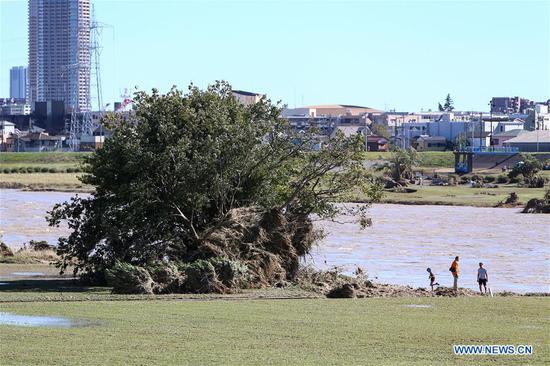 Photo taken on Oct. 13, 2019 shows trees swept down by the flood in Tokyo, Japan. (Xinhua/Ma Caoran)

Typhoon Hagibis, which swept across central and eastern Japan on Saturday and Sunday, has claimed at least 58 lives in Japan as of Monday as search-and-rescue operations continued in flood- and landslide-hit areas of Nagano and other prefectures.

In addition, 14 people are listed as missing, and 211 others were injured during the weekend storm, according to the latest NHK tally.

According to the Ministry of Land, Infrastructure, Transport and Tourism and other government agencies, a total of 37 rivers in Nagano, Fukushima, Ibaraki and four other prefectures flooded, with up to 40 percent of the yearly rainfall recorded in only a day or two in many areas.

About 38,000 people in 17 prefectures had evacuated from their homes by midday Monday, according to the Fire and Disaster Management Agency. Meanwhile, NHK tally showed that more than 8,000 homes had been flooded across the country.