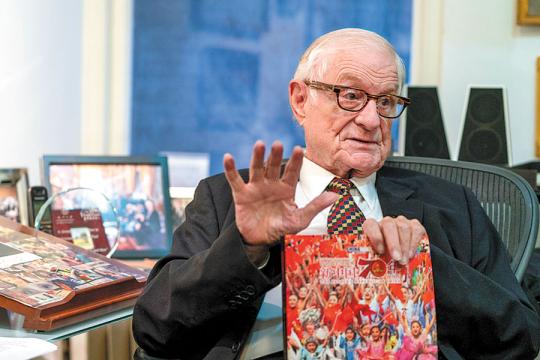 Nicholas Platt holds a photo book, published by China Daily, celebrating the 70th anniversary of the founding of New China, during an interview in his New York office on Oct. 3, 2019. (Photo by Gao Tianpei/China Daily)

Over the past four decades the China-U.S. relationship has become too complicated to decouple, and many on both sides are determined to sustain it, a U.S. diplomat and China expert told China Daily in a recent interview.

Using an iceberg as an analogy, Nicholas Platt, who accompanied U.S. president Richard Nixon on his historic trip to Beijing in 1972, said in an exclusive interview on Oct. 3 that private, nonstate links between China and the United States have grown exponentially in past decades.

They are kept intact below the surface despite the "jagged piece of ice" and "sharp edges" seen above the waterline.

"There may be people who want to decouple us, but there are a lot of people who don't, or people who've had relationships between" the two countries-organizations, companies, movie moguls, basketball players-who are in contact all the time and exchanging messages that "the governments don't even see", Platt said.

A China expert long before the 1972 trip, Platt was an eyewitness to two groundbreaking events in the early days of the bilateral relationship-the Nixon visit, a trip that led to the normalization of relations between the two countries, and the opening of the U.S. Liaison Office in Beijing in 1973.

Platt was chief of the political section at the liaison office in 1973 and 1974. That was when he had the first taste of people-to-people relations between the two countries through casual conversations he had with locals as he biked around the city.

Platt said he bought a bicycle as soon as he arrived in Beijing and joined the millions of Chinese streaming through the city on two wheels.

"To my pleasure and delight", those people would start a conversation with him, said Platt.

" (They were) just ordinary laobaixing (civilians)," he said about those people. "We talked about movies; we talked about things that people knew about.

"This for us represented a kind of relief from the isolation of being a foreigner in China half the time," he said.

Platt introduced that lifestyle to fellow members of the liaison office and later recommended it to George H.W. Bush-the future president, who began serving as top U.S. diplomat to China in 1974-as the first thing to do in China.

A photo of Bush and his wife, Barbara, riding bicycles in front of Beijing's Tian'anmen Square in the mid-1970s, has become emblazoned in the memories of people in China.

"The private side of our (bilateral) relationship started to grow in 1973, and none of us had a clue as to how fast it would grow and what it would become," Platt said.

Even when the relationship faced challenges, "the private ties had become so strong in trade, in investment, in exchanges and so on and so forth, that they became the rationale for the relationship", he said.

"In certain areas like cultural exchange, the Chinese are welcoming and realize that this is one area in which both sides can agree, and there are not a lot of political blowbacks-so this is what I basically work on, and I find myself quite busy," said Platt.

He got involved in China-U.S. cultural exchanges in 1973 when he helped facilitate a visit to China by the Philadelphia Orchestra-the first U.S. orchestra to perform in China.

Platt accompanied the orchestra's 12th tour of China this year and saw an increased interest in Western and classical music, "fed by the growing affluence of the middle class", he said.

China values the links with the U.S., which makes Platt "less pessimistic" about the future of the bilateral relationship.

"Some of the China hawks think that you can pull this relationship apart, but I frankly don't think you can," he said.

"China is too big to contain, and the relationship is too complicated to decouple," said Platt, which "does not mean there are no issues between us".

He said most of the serious issues between the two countries are related to trade reciprocity.

"China has much more accessibility to the American economy than American firms have to the Chinese economy," he said, saying that was a cause of much friction.

"I think it's perfectly normal for people to react to something that is as big as China and growing as fast as China, to want to pay attention" to it, and to want to make sure that exchanges with it are fair, Platt said.

The solutions to problems between the two countries will enable China to move ahead and "help with our problems bilaterally", he continued, adding that this also gives him hope for the future.

With negotiators in the latest round of high-level trade talks between China and the U.S. reaching a preliminary agreement, Platt believes that "the shape of a settlement is in place".

"I personally feel that the forces are in place at least to call a truce", as a settlement takes political will on both sides to materialize, he said.

"The situation is such that both sides are so intertwined that they can't really take major affirmative action against the other without hurting themselves just as much," Platt said.

"I have seen enough crises in our relationships in the past to know that we'll figure out a way of dealing with it over time," he said.