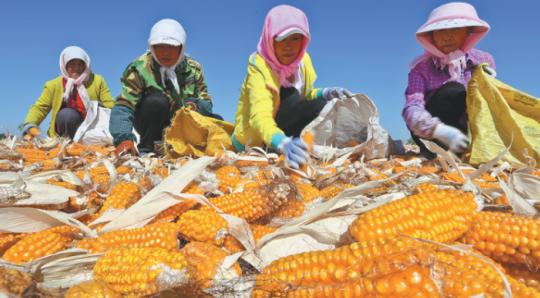 The country will also continue to expand and diversify sources of food imports to balance its own food security, said the white paper titled "Food Security in China", released by the State Council Information Office.

Per capita grain output in China is 470 kilograms, a rise of 14 percent

"We will continue the efforts to ensure China's food security so the rice bowl remains firmly in our own hands," Zhang said.

In the meantime, China has been intensifying international cooperation in food and agriculture and opening up its domestic food market, especially since it joined the World Trade Organization in 2001, the white paper said.

"China will keep opening up and intensifying international cooperation in food and agriculture," said Su Wei, deputy secretary-general of the National Development and Reform Commission, adding that China is willing to share with other countries its experiences in improving food security.

"We hope to see hunger and poverty eradicated from the world as soon as possible," Su said.

By the end of 2016, China had helped more than 50 countries in Africa to carry out nearly 500 agricultural assistance programs, covering areas including farming, grain storage, agricultural machinery and agricultural product processing, according to the white paper.