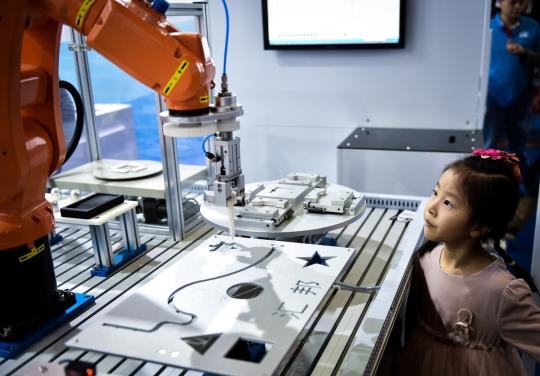 A girl watches an AI-supported robot arm making a billboard during a high-tech exhibition in Shenzhen, Guangdong province. [Photo/Xinhua]

Increased efforts will be made to develop high-skilled robotics talent as part of a broader push to encourage growth in China's robotics sector, an official at the nation's top industry regulator said on Friday.

Fu Jianqi, an official at the Ministry of Industry and Information Technology, said the production volume of industrial robots hit 148,000 units in 2018, accounting for more than 38 percent of the global total.

"China is the top producer of industrial robots, but we have a low proportion of high-skilled robotic talent," Fu said.

China's industrial robot market is growing rapidly, but the total number and structure of manufacturing talent are struggle to meet the requirements of the manufacturing industry, said Fu.

There is a desperate need for high-skilled talent in industrial robots, who know both manufacturing technology and information technology, Fu said.

This year's event will be held in Jinan, capital of Shandong province, from October 18-20.

About 240 players will attend the final round of competitions to showcase their talents.