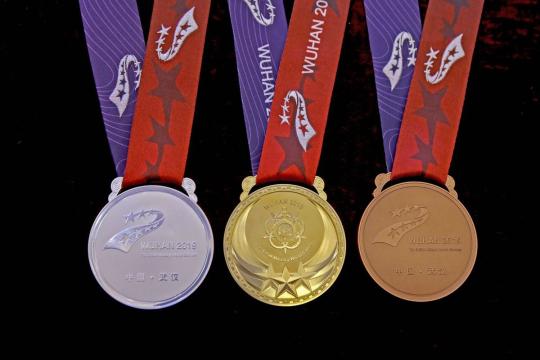 The executive committee of the 7th Military World Games unveils the medals to be awarded to competitors. (Photo by Li Wei for chinadaily.com.cn)

The executive committee of the 7th Military World Games unveiled the medals and trophies to be awarded to competitors at a news conference in host city Wuhan, the capital of Hubei province, on Thursday.

The medals, 81 millimeters in diameter and 5 mm thick, have Chinese cultural elements integrated in their design, including the Great Wall, plum blossoms, Wuhan's iconic Yellow Crane Tower and five-pointed stars, in addition to the logo of the International Military Sports Council and the emblem of the games. 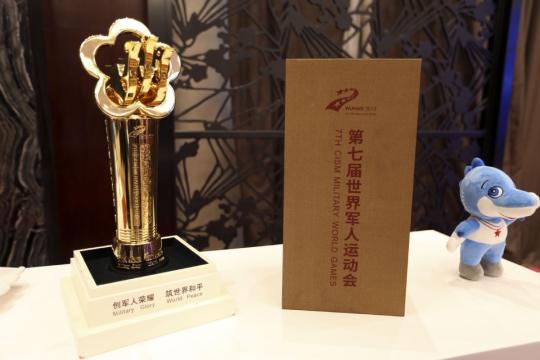 The executive committee of the 7th Military World Games unveils the trophies to be awarded to competitors. (Photo by Li Wei for chinadaily.com.cn)

The trophies feature plum blossom and dove elements as well as the number seven and the colorful ribbons and auspicious clouds found in the games' emblem.

The committee said the dove carries the meaning of world peace, the number seven indicates it is the 7th games and the auspicious clouds represent blessing and the city of Wuhan, which is known as the hometown of white clouds and yellow cranes.

Nearly 10,000 athletes from more than 100 countries are expected to compete at the games, which begin on Oct 18.