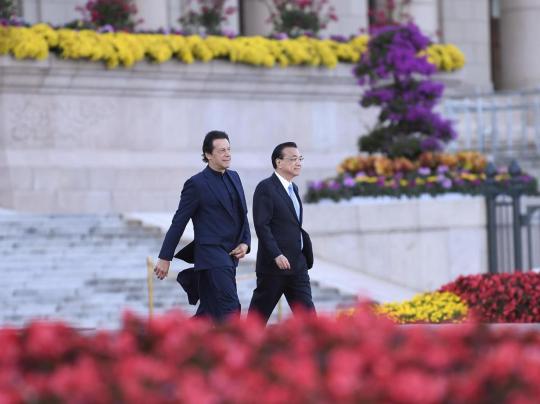 Premier calls for greater alignment in both countries' development strategies

Premier Li Keqiang reaffirmed China's staunch support for Pakistan in its efforts to safeguard national independence, sovereignty, territorial integrity and legitimate interests in a meeting with his Pakistani counterpart Imran Khan on Tuesday.

China has always seen Pakistan as a priority in its neighborhood diplomacy and will support its efforts to push forward national prosperity and rejuvenation, Li told Khan, who is making his third visit to Beijing within a year.

The two nations are all-weather strategic cooperative partners and their bilateral friendship is built on strong foundations, he said.

Li added that the bilateral friendship is not attached with any terms nor does it target any third party, and it enjoys hearty support from both peoples.

He called on both nations to continue to deepen mutual strategic trust, expand pragmatic cooperation and conduct closer people-to-people exchanges so as to bring bilateral ties and cooperation to a new level.

China stands ready to continue to provide Pakistan assistance to the best of its capacities, he said.

Li also urged greater alignment in development strategies of both sides and continuous efforts to promote high-quality development of the China-Pakistan Economic Corridor.

Li also appealed to Pakistan to ensure the security of Chinese institutions and personnel in the South Asian country.

Khan, who will attend the closing ceremony of the Beijing International Horticultural Exhibition on Wednesday, said Pakistan's economy is stabilizing and gradually recovering thanks to China's help and support, and this showcased the firm all-weather friendship between the two nations.

"An all-weather friend means helping a friend in need when you know your friend is in difficult times. China yet again stood with us," he said.

Pakistan is ready to work with China to expedite the high-quality building of the Belt and Road, and it attaches great importance to the construction of the CPEC and Gwadar Port, Khan said.

He also called on both sides to expand the volume of trade and investment and enable greater bilateral cooperation in energy, hydropower, nuclear power, railways and the agricultural sector.

The two leaders also witnessed the signing of a number of cooperative agreements in which China will help 50 universities in Pakistan build 100 smart classrooms and help the South Asian country build a desalination plant.

The two nations will also step up cooperation and exchanges in maritime law enforcement and the protection of cultural relics as part of the agreements.

Luo Zhaohui, vice-minister of foreign affairs, said at a news briefing after the meeting that both countries have reached broad consensus on the development of the CPEC.

"The two sides will focus on the expansion of the CPEC development to areas such as industrial cooperation, giving greater priority to the well-being of the people and extending the corridor to the western areas of Pakistan," Luo said.

The two nations reaffirmed their determination to fight all forms of terrorism, and China will support Pakistan in conducting its anti-terrorism campaign to the very end, he added.