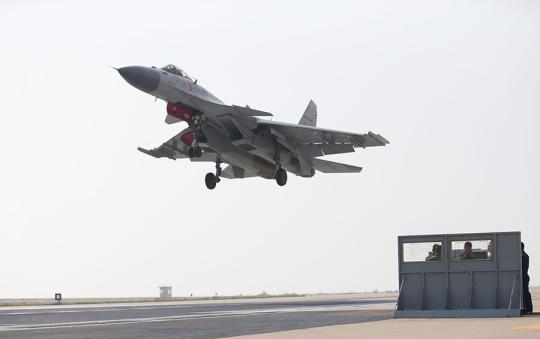 Five carrier-borne J-15 fighter jets with Flying Shark logos painted on their vertical stabilizers flew in a perfect V-shaped formation over Tian'anmen Square in Beijing on Oct 1 during a military parade to celebrate the People's Republic of China's 70th birthday.

The J-15 fighter force, established in 2013, is China's sole carrier-based air combat unit. Representing a major milestone in the People's Liberation Army Naval Air Force's combat capability, the force's crown jewel has participated in all five military parades in China in the past four years.

Zhang Ye, the pilot of the lead aircraft in the J-15 formation, said it is no easy task flying a warplane at high speed, low altitude and in tight formation while coping with turbulence produced by aircraft ahead and distractions from celebrations on the ground.

The carrier-borne fighter jet is one of the key frontiers in the PLA's endeavor to become a world-class force and the "iron fist" of the Chinese Navy, capable of protecting national sovereignty and overseas interests, he said.

"Therefore, our parade is a powerful demonstration of the latest achievements of China's military reform, and an effective way to showcase our military strength and the ability to carry out our duties in the new era," he said.

"Our fighter force is very young, and we are extremely proud to be part of the national celebration. Although we have overcome difficulties regarding carrier-borne jet launching and landing, we still have a long way to go in terms of improving combat capability. This task is arduous, but we have the confidence to overcome all obstacles."