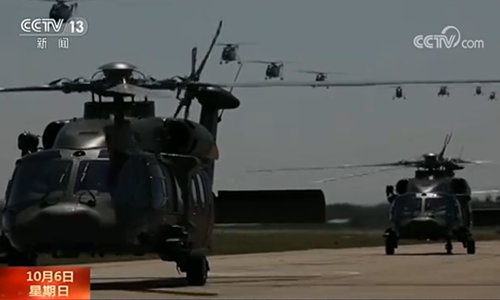 The Chinese tactical helicopter that debuted at the National Day parade on October 1 is the first in China to use fly-by-wire controls that make the aircraft easier and safer to fly in complicated battlefield situations, military experts said on Monday.

"The handling of the Z-20 is more sensitive, as it is China's first domestically made helicopter to use a fly-by-wire control system," Z-20 pilot Song Xinning told China Central Television (CCTV) on Sunday.

Unlike traditional flight control systems that use a series of mechanical linkages to directly pass on the pilot's control inputs to the aircraft, fly-by-wire processes the inputs through a computer which tells the aircraft to perform what is required, an anonymous military expert told the Global Times on Monday.

Thanks to the computer that can do extra calculations, the pilot can maneuver the aircraft more easily and stably, the expert said, noting the technology is common on fixed wing aircraft, but less common with helicopters due to complexity and cost.

The computer is also lighter than mechanical linkages, meaning the aircraft can use the spare weight capacity for other purposes, the expert said. Song did not mention if a traditional flight control system is still installed as a backup on the Z-20.

The Black Hawk, a US utility helicopter with which the Z-20 is often compared, also saw an experimental fly-by-wire retrofit in June, which enabled the chopper to become optionally piloted, according to a statement released in June on the website of Lockheed Martin, parent company of Black Hawk maker Sikorsky.

Zhang Qiqi, another Z-20 pilot, told CCTV that as pilots of the army air assault force they need to not only fly helicopters, but also play the role of a commander, coordinating air and ground forces, giving proper guidance and making them cooperate.

The Z-20 is a medium-lift utility helicopter that can adapt to different terrains and weather and can be used in missions including personnel and cargo transport, search and rescue, reconnaissance and anti-submarine operations, experts said.